Facebook issue I can understand; LinkedIn needs some work

I can forgive Facebook. I realize they can’t read every obituary in every newspaper or from every funeral home so when I get a “Wish so and so a Happy Birthday” and know that friend’s been dead for a few years, I think of him or her and some of the memories. I have a couple of high school buddies who passed away five or six years ago, yet every birthday I get something from Facebook to tell them Happy Birthday.

Those I can understand.

I’m starting to get miffed at LinkedIn though. Signed up for it several years ago but haven’t found it useful at all. I can’t remember any time as a matter of fact I’ve done anything with it. 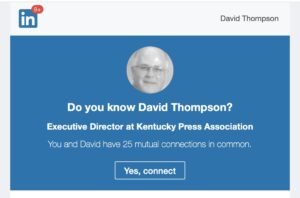 But in the last month, I had a couple of questionable notices from LinkedIn — Do you know so and so? Well, just because LinkedIn says we have some mutual connections doesn’t mean I’m interested at all in joining their network. Sometimes far from it.

Tuesday night though took the cake. Here comes the usual email from LinkedIn, an invitation to join someone’s network, especially if I know him. Yeah, him in this case. We have 25 mutual connections, the invitation says, so LinkedIn thought I should join that person’s network.

I didn’t know you could join your own network. But that’s who the invitation was for. Me. Wanting me to join my own network because we (me and I) have 25 mutual connections.

Maybe joining my network wouldn’t be a bad idea. Then I could make some comments on issues facing the state or the nation and not stand the chance of creating an argument. Or worrying about offending myself when I read my message. Yeah, maybe I should hit “Yes, connect” just so I can make sense to or of myself.

But then, On Second Thought….