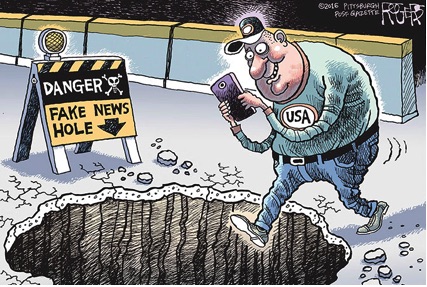 When the Founding Fathers wrote the Bill of Rights, their First Amendment to the Constitution included freedom of the press. They knew that the democratic republic they had created would not succeed unless the people had unfettered freedom to publish and gather information on which to base their decisions, and to hold their governments in check and make their officials accountable. As Thomas Jefferson wrote in 1786, “Our liberty cannot be guarded but by the freedom of the press, nor that be limited without danger of losing it.”

Today, many Americans distrust the press, and many of them have become victims of “fake news” – not news that some politicians don’t like, but stories that contain falsehoods or are entirely made up. Many find it difficult to tell fact from opinion (sometimes media make that unclear), and don’t understand the differences between news media (journalism, which has a discipline of verification), social media (which have no verification) and strategic media, which are trying to sell you a good, a service or an idea, and sometimes masquerade as news media.

“The challenge of living in the digital age is to become more responsible news consumers,” Richard Nelson of the Commonwealth Policy Center wrote recently. “Distinguishing trustworthy from dubious sources and sorting out fact from fiction is the first step.”

To help folks in Western Kentucky do that, Nelson and some people from journalism and the news business will discuss such issues with each other and the audience at Madisonville Community College on the evening of Thursday, Aug, 2. The free program will begin at 7 p.m. and the public is urged to attend.

The program will include research and advice from the News Literacy Project, a national nonprofit organization that offers nonpartisan, independent programs that teach students how to know what to believe in the digital age. It encourages use of the same programs to help adults be news-literate.

The discussion will be moderated by Al Cross, professor of journalism and director of the Institute for Rural Journalism and Community Issues at the University of Kentucky, and contributing political columnist for the Louisville Courier Journal. He and Nelson, who has been critical of some news-media practices, will be joined by Jennifer P. Brown, co-chair of the Institute’s advisory board and former editor of the Kentucky New Era in Hopkinsville; Mike Alexieff, editor of The (Madisonville) Messenger; and Ron Sanders of SurfKY News, based in Madisonville.

This free program is sponsored by the Institute and the law firm of Will Cox, PLLC, in Madisonville.