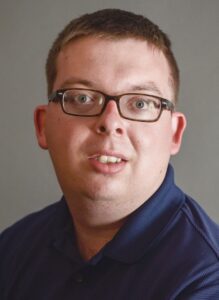 CAMPBELLSVILLE, Ky. – In April 2015, when he was 15, Gerard Flanagan began installing and repairing appliances for his family’s business until August 2019.

He wrote stories, conducted interviews for the Enterprise and took photographs to go along with his stories.

On Aug. 20, 2021, he decided to leave The Lebanon Enterprise, and on Aug. 23, he received an offer to work as a news writer and photographer and to do social media for the Office of University Communications at Campbellsville University.

“Gerard already knew Campbellsville University, and that’s always a plus when you are hiring an employee,” Joan C. McKinney, director of university communications at the university, said. “Gerard is a good writer and we’ve been glad to have him on our team and getting to know him.”

Flanagan had graduated from Elizabethtown Community and Technical College in December 2018, and two years later, in December 2020, he earned a degree in mass communication with an emphasis in journalism and a minor in history from Campbellsville University.

“It is a great feeling to come back and work for my alma mater,” Flanagan said. “I am glad this opportunity came up, which allows me to continue using my skills and passions. I am excited to be here at Campbellsville University.”

He is the son of Charlie and Jackie Flanagan of Lebanon; his family owns and operates Flanagan’s Appliance in Lebanon.

Flanagan also lives in Lebanon and has three cats, Snowflake, Zoey and Teddy, a dog named Popcorn, and a foster cat, Dove.

Campbellsville University is a widely acclaimed Kentucky-based Christian university with more than 12,000 students offering over 100 programs of study including Ph.D., master, baccalaureate, associate, pre-professional and certification programs. The website for complete information is www.campbellsville.edu.