KPA general counsel Jon Fleischaker, the father of Open Meetings and Open Records, and attorney for other Kentucky newspapers, held a 60-minute discussion of public access to open government Thursday night. The session, held at the Lexington Herald-Leader, was sponsored by the Bluegrass Chapter of the Society of Professional Journalists, the Institute for Rural Journalism and Community Issues and KPA.

Jon discussed Senate Bill 193 and House Bill 387 with good reports that both appear dead for this 2019 General Assembly. SB 193 will be a topic of discussion by the Interim Joint Committee of the Judiciary, according to committee chair Sen. Whitney Westerfield. That announcement came at the end of brief testimony Thursday by the sponsor Sen. Danny Carroll and KPA attorney Michael Abate.

HB 387 has had its two readings before the House and they’re out until Tuesday. With only four days left in the session, it’s a stretch to think there’s a chance of getting that House vote and then pushed over to the Senate where a committee meeting and three readings would be required for a vote to be taken on the Senate. We hope to work with Rep. Petrie during the interim to address his concerns. We had a good meeting with him on Wednesday, felt me make progress and may not be all that far apart in coming up with agreed-on language.

Following the Thursday night seminar, I was honored to present Jon with a framed print of the 150th Anniversary artwork, commemorating KPA’s 150 years of service to Kentucky newspapers. The print was the idea of 2018 KPA President Peter Baniak. 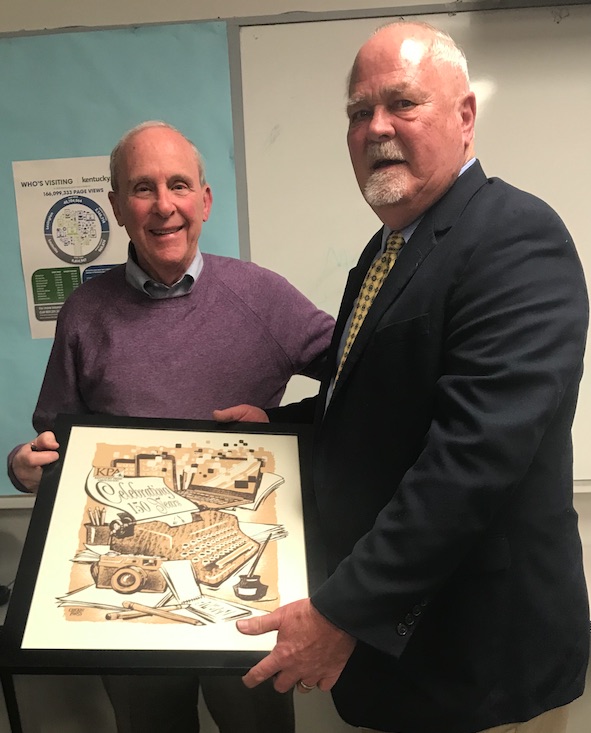