(Editor’s Note: Jordan Hall is assistant general manager of the Troublesome Creek Times in Hindman. His mother, Sharon, is co-owner and publisher of the Knott County weekly. He still has the distinction of being one of the youngest winners in a KPA contest several years ago as a young teenager if not a pre-teen.) 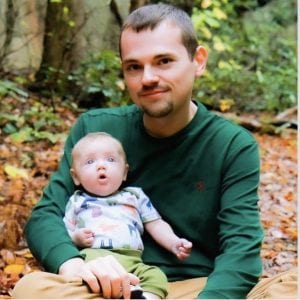 Thousands of people showed support for new Knott County father Jordan Hall in July when, on social media, he shared the story of his wife who suffered sudden complications with her pregnancy and died.

“Noah’s story has truly circled the globe,” Hall said. “I’ve had people reach out to me from coast to coast and everywhere from England to Africa.”

“Noah is a treasure to raise,” Hall said, ”and he is raising me more than I realize. Every adoring smile, bashful laugh, and … snuggle is heartwarming reassurance. He is such a happy, healthy baby.”

Hall, the 29-year-old assistant general manager of Knott County’s Troublesome Creek Times, and his wife Morgan Hall, 26, a college and career counselor for Knott County Schools, had rushed to nearby Whitesburg Appalachian Regional Hospital after her blood pressure unexpectedly increased six weeks before her due date.

Within hours, on July 13, Noah was born prematurely in an emergency C-section weighing 4 pounds and 14 ounces. Morgan died one day later from hemorrhagic shock caused by a probable amniotic fluid embolism, her death certificate said.