For Pete(r)’s Sake: Another Board Special Election adds to Peter Baniak’s ‘unique’ year as KPA President 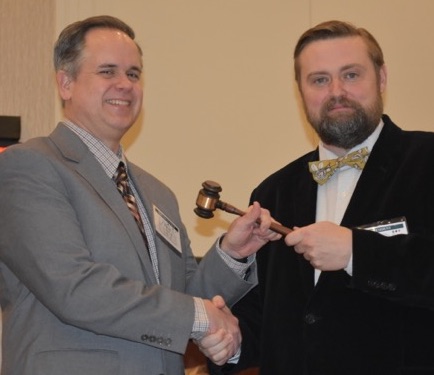 Peter Baniak, left, accepts the President gavel from Ryan Craig, 2017 KPA President, and probably not anticipating the year he’d experience at the helm of the nation’s 10th oldest state press association. But through it all, Peter’s always worn that huge smile. Photo by Teresa Revlett.

Peter Baniak’s year as president is like no other in the previous 148 years of the Kentucky Press Association. From the day he took office back in January and through last week, there have been changes galore in the makeup of the KPA Executive Committee and Board.

Actually, let’s back up to October 2017 and the KPA Fall Board Retreat. Several items and issues were discussed but with most every one of them, 2017 President Ryan Craig told the Board he was delaying action on those issues and would let Peter handle them when he moved in to head the organization. That should have been an omen that 2018 was about to get interesting.

Soon after we left Lexington and the 2018 KPA Winter Convention, where Peter had just been installed as president, word came that KPA Vice President Kim Woods would be leaving her position at the Herald-Leader. But wait, not only was Kim recently elected Vice President, she was also District 13 representative on the KPA Board and chair of the KPA Advertising Division. So her resignation meant not one, not two but three positions we were going to need to fill.

The Vice President spot should have been easy to fill. We’d just move KPA Treasurer Larry Hensley up the ladder and find another Treasurer. But then Larry announced he was returning to Schurz Communications in Indiana and would resign his Treasurer’s post so he couldn’t move up to VP. And he also had to resign the District 13 Board seat. Two more positions we were going to need to fill.

Ok, let’s start with the VP election. We’ll have an election and the person winning that will take over immediately. Jeff Jobe, District 4 Board member, was then elected KPA VP. And Jeff moving over to VP meant his elected Board seat had to be filled. So it required a special election of the papers in District 4 and Sam Terry, editor for a number of Jeff’s Jobe Publishing Inc. papers, won. At the same time, we had Special Elections in District 14 to replace Larry Hensley on the Board and then District 13 to take that Board seat Kim vacated.

Catherine Boone, general manager of the Frankfort State Journal, was fairly new to Kentucky but papers in District 13 thought enough of her to elect her their representative to finish out Kim’s term. In District 14, Dave Eldridge volunteered to be recycled on the Board, a stint he previously enjoyed as he worked his way through the ranks to become President in 2002. Both were elected automatically since no other person was nominated for either district.

One of Kim Woods’ important assignments was serving as chair of the KPA Ad Division, especially with the Ad Focus Plan that was adopted in 2017 by the Board. We didn’t have to look far to find Kim’s replacement. Heather McGinnis, also with the Herald-Leader who sat in on the Ad Division sessions with Kim, moved in to chair the division.

But let’s go back to District 4. Before Sam Terry’s first Board meeting, his work schedule was changed to part-time, meaning he wasn’t eligible to represent the district. Yet another Special Election had to take place in late Spring. Melissa Mudd, GM and editor of the Butler County Banner and Edmonson News, both also Jobe Publishing Inc. papers, won a special election to complete the term for District 4.

Before the end of the Spring semester at UK, Chris Poore, adviser to the Kentucky Kernel, announced he was resigning to begin a new career path. Chris, who also had been on the Board before, was chair of the Kentucky Intercollegiate Press Association, the newest KPA division and one that offers the chair a position on the Board. Michele Day, adviser to The Northerner at Northern Kentucky University, was vice chair of KIPA so with Chris’ resignation, Michele moved up to chair and then onto the KPA Board.

At the end of July, Ashland Daily Independent publisher Eddie Blakeley announced he was leaving CNHI and taking a job a chief operating officer of Journal, Inc., in Tupelo, MS. Eddie was a State At-Large Board member in 2018, appointed by Peter to his first, one-year term. Being late in the year, we decided not to fill that appointed position.

Announcements went out to the publisher of each newspaper about the new process and included a ballot. Publishers were given a couple of weeks to consider the one they wanted to vote for before having to return the ballot. But midway through that process, Jeff Moreland, publisher of the Central Kentucky News Journal and Springfield Sun, one of the four candidates for VP, announced his resignation from the newspapers, from the Board and thus from being a VP candidate.

At that same time, we had just completed an election in District 12 where Jeff defeated Sharon Burton for another three-year term on the KPA Board. Since the ink hadn’t even dried on the story in On Second Thought about that election, Sharon Burton moved into the District 12 Board seat, effective as soon as Jeff’s resignation date arrived.

And then it was deadline time for voting on the Vice President. Three candidates remained after Jeff’s resignation — Dennis Brown with the Lewis County Herald; Regina Catlett with the Sebree Banner/Sturgis News; and Sharon Burton, with the Adair County Community Voice.

In a close race with just more than 50 percent of the newspapers voting, Sharon Burton was elected as VP for 2019.

So is it over yet? No. Sharon’s election as VP means we need to have another election in District 12 to fill her seat on the Board that wasn’t even occupied yet. She hadn’t even served a week as the Board member for that district.

And so now, District 12 newspapers — including all full members newspapers in Adair, Casey, Clinton, Cumberland, Green, McCreary, Pulaski, Russell, Taylor and Wayne counties — have received another nomination form and a letter explaining the need for the Special Election. We should know of the nominees in the next 10 days and then if more than one person is nominated, we’ll send election ballots to the publisher at each member newspaper in those counties.

And hopefully, the 2019 KPA Board of Directors will be settled and set to help celebrate our 150th Anniversary in January.

It’s enough to recall the most famous comedy routine of all time — Abbott and Costello’s “Who’s On First” routine.