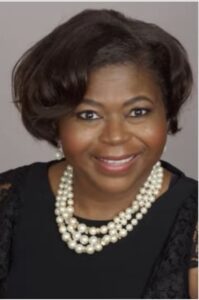 (Please note: The information below was compiled by the South Carolina Press Association and Kentucky Press Association staffs. Kim served as Vice President of both associations. The obituary is not yet available as of Friday morning.)

Kim, former vice president of Advertising for the Herald-Leader/HL Media was elected KPA Vice President in January, 2018. She also had served as chair of the KPA Advertising Division. In April, 2018, she resigned from the Herald-Leader and as KPA VP and was named Gannett’s Automotive West Region Sales Director.

Kim earned her Bachelor’s Degree in Journalism as well as her Master’s in Education from Winthrop University. She is also a graduated of Northwestern University’s Advanced Executive program.

In addition to serving on SCPA’s Executive Committee, SCPA staff researched S.C. newspaper history and determined that while serving as publisher of the Yorkville Enquirer and The Clover Herald, Woods made history as the first female African-American newspaper publisher in SCPA’s nearly 170 year history.

Earlier this year, Kim was honored by the South Carolina legislature as being the first female African-American publisher in that state:

She began her career as an automotive account executive for the Herald Media Group in Rock Hill and worked nearly 28 years for McClatchy newspapers.

She was also a graduate of Northwestern University’s Advanced Executive program.

After leaving S.C. newspapers, Woods went on to serve as advertising director at newspapers in Florida and Kentucky, and she led USA Today Network/LOCALiQ’s Automotive West Region as sales director.

While working as Vice President of Advertising for the Lexington Herald-Leader, she served on the Kentucky Press Association Board of Directors and was elected Vice President in 2018.

For the past two years, Woods worked for Pearson Online Learning Services in Arizona as Vice President of Business District Development and Associate Director of Recruitment/Partnership and Business Development.

A celebration of life will be held Saturday, Dec. 4, at 11:30 a.m. at John W. Woodward Funeral Home, located at 594 Howard St. in Spartanburg. Due to COVID-19, the event will be held outside so please dress accordingly.

Please join SCPA and KPA in thinking of Kim’s family during this difficult time.

Here is the link where Kim’s obituary will be posted on the J.W. Woodward Funeral Home site.