Former Stanford Interior Journal editor, Michael Broihier, has thrown his hat into the Democratic primary for U.S. Senate. Broihier, 57, was with his hometown weekly for five years, the last three as editor. 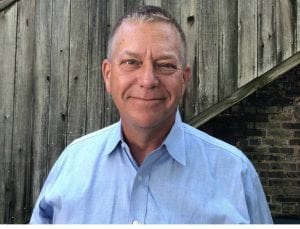 “I’m running for the people of Kentucky, because they deserve a Senator who has courage, courage and the commitment to lead,” Broihier told the Herald-Leader. “I don’t think Mitch McConnell’s doing that.”

Broihier enters the race as some Kentucky Democrats are clamoring for a challenger to former Marine Corps pilot Amy McGrath, who stumbled early after her campaign launch last week. Broihier said McGrath’s rocky start didn’t affect his decision to get into the race.

“No, not at all,” Broihier said, before adding a jab. “When I saw this roll-out, I did not recognize her from the campaign I saw last year that my wife and I supported.”

McGrath raised $3.5 million in the first 48 hours of her campaign, but also invited open speculation of primary opponents when she stumbled over whether she would have voted to confirm U.S. Supreme Court Justice Brett Kavanugh, telling reporters that she would have confirmed him in interviews before changing her answer later the same day.

No prominent Democrats were calling for Broihier to run. A long shot candidate, he has never held public office, nor has he ever run a campaign.

Broihier said he wants to run a race centered on economic justice, saying that rural communities have not been able to take advantage of a good economy.

Broihier said he is trying to run a “no-labels” campaign, but said he would not have voted to confirm Kavanaugh (“I will not vote for a judge that does not acknowledge that Roe V. Wade was correctly decided”), said he supports the Paris Climate Accord to address climate change (“when you have big problems the earlier you start on them the better”), opposed the separation of immigrant families at the border (“appalling and un-American”), said he doesn’t support the idea of a massive raid to round up illegal immigrants (“I think it’s the leaders of the government threatening to use the government’s power to terrorize a group of people”) and said he supports universal background checks before someone can purchase a gun (“every common sense person I know believes in universal background checks”).

When asked why he is choosing to run for senate instead of starting with a local office, Broihier focused his answer on McConnell.

Steven Cox, a healthcare professional is also running as a Democrat.