From intern to editor in two years 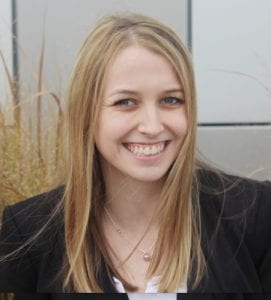 In 2015, she interned at the Oldham Era, her hometown newspaper. Two years later, Amanda Manning finds herself sitting in the editor’s seat for the LaGrange weekly.

Amanda is originally from Oldham County but attended The New School in New York City. She applied for the internship through the KPA/Kentucky Journalism Foundation program and found herself spending 10 weeks in 2015 as the intern for The Era. After graduation, she returned to the Oldham Era as a reporter and recently was named editor of the Landmark weekly.

Amanda knew she wanted to work in the media but wasn’t certain if it would be in radio, TV or newspaper. She interned in all three media but credits the KPA internship with helping her decide.

Here’s Amanda’s ‘Intern Experience’ she wrote upon completing the internship program in 2015:

“This summer, I went into my KPA internship and radio internship in the hopes of figuring out which media field I’m interested in. (I’ve also interned in television news). While I haven’t completely figured that out yet, I believe that my summer KPA internship has tremendously helped that decision.

“Although I go to school in NYC, I prefer local news any day over national news. I was lucky enough to receive an internship at the newspaper in my hometown that I’ve grown up reading.

“Right before I arrived at The Oldham Era, the editor unexpectedly left. Turns out that was a blessing in disguise to me (and probably to the staff that I arrived). Since we were low one person, I acted more as a reporter and a vital part of the team than an intern.

“I’ve always been taught in college that one important thing to look for in your future journalism career is a good editor. Even though there was no main editor this summer at The Oldham Era, my publisher and news editor were the best editors I could have asked for.

“Being able to work in an environment where I was treated like one of the main reporters has taught me many invaluable things this summer. I’ve covered a variety of stories, from Fiscal Court meetings, to a Hallmark Movie being filmed in La Grange, to breaking news, features and even interviewing a local woman who was on the television show Catfish.

“I’m sad to be leaving The Oldham Era soon, as I’ll miss the staff, interacting with the new connections I’ve gained and writing a variety of stories about Oldham County. Speaking of writing, this internship has made me fall more in love with that, too. Maybe newspapers will win after all.”

Here’s a little more background on Amanda from her first column as editor, written a few weeks ago.

“I’ve interned in the three main types of media, print, radio and television. I like print the most. It allows you to dive deep into issues and explore them.

“I graduated Oldham County High School in 2012. Then, I spent four incredible years studying Journalism and Design at the New School in the media capital of the world – New York City.”