Staff report from the Madisonville Messenger 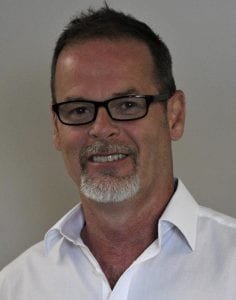 A familiar face to the staff of The Messenger has been named the paper’s editor. Jon Garrett, 49, a 21-year resident of Madisonville and the paper’s former managing editor, is replacing Mike Alexieff, who has accepted a publisher position with a Paxton Media Group sister paper in Lebanon, Tennessee.

“Jon is a talented journalist with deep roots in Hopkins and Webster counties,” said Rick Welch, publisher for The Messenger. “We are pleased to have Jon move into this leadership role as we continue our commitment to the printed newspaper and as we continue to expand and improve our digital products. I am confident both our employees and the community will quickly learn what a quality person they have in Jon.”

Garrett rejoined the paper in January following time spent as media relations director for the former Trover Foundation and as general manager for a local golf course in Providence. He also was a former magistrate in Hopkins County.

“At heart, I’ve always considered myself a journalist,” Garrett said. “The transition back into the newspaper business has been relatively smooth from my end. In the last few months, I’ve confirmed what I already knew — I’ve missed writing and reporting.”

Garrett said he wants to build on the local coverage in both the news and sports departments in his new job.

“I feel I have a good instinct on what community journalism should look like,” he said. “I believe my strength will be helping our staff understand that role better and how important it is to communities like Madisonville.”