General Assembly returns Tuesday for Round Two of 30-day session 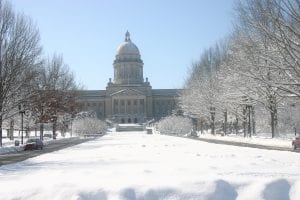 The 2021 Kentucky General Assembly has eight days under its belt and now returns Tuesday for the final 22. Being an odd-numbered year, the legislature is limited to 30 days. The session gaveled in on Tuesday, January 5, and took the prerogative of extending the initial four-day organizational session to eight days.

That gave the General Assembly time to get through legislation in both chambers. That process normally takes a minimum of five days and during 30-day sessions the opening round is only those first four days.

The adjusted legislative calendar for the 2021 session shows March 30 as SINE DIE, the last day of the session. The schedule also shows something called Drafting Day on three Mondays with the Presidents Day holiday February 15 sandwiched between those three Mondays.

KPA continues working with Rep. John Blanton and House leadership on House Bill 6. As written about when the session opened, that bill as introduced could even prohibit using the name of the governor or the attorney general. It prohibits mentioning the first and last name of any current or former Attorney General. Gov. Andy Beshear, of course, is a former Attorney General and Daniel Cameron serves in his first term in that same office.

KPA and its lobbying firm Top Shelf Lobby continue reading all bills filed and introduced and will notify members if there is legislation that creates a cause for concern.

So far, there have been 280 House bills filed and 117 Senate bills. The last day to introduce new Senate bills is February 10 with February 11 being the same on the House side.