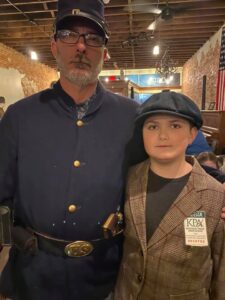 C. Josh Givens, reporter for the Hancock Clarion, and son, Ethan Givens during the “Blood Thirsty Greenville” history tour. Ethan was “on assignment” as a 1920s newspaper photographer, covering the tragic death of a woman in downtown Greenville. He wears his father’s expired KPA credentials from the Leader-News of Central City.

Hancock Clarion reporter C. Josh Givens and son, Ethan Givens, participated in a living history tour of some of the murders and tragic deaths which have occurred throughout the history of Greenville in Muhlenberg County, where the Givenses live.

Josh portrayed a Civil War Union major who was shot dead on the streets in 1865 after confronting another Union soldier for possible desertion.

Ethan, 12, portrayed a 1920s newspaper photographer who quickly showed up to the scene of an incident in which a woman was pinned against a downtown business after a Model T Ford jumped the curb.

The event on Oct. 22 and 23 was titled “Blood Thirsty Greenville,” and was organized by Ben Duvall and Ben’s father, Barry Duvall. Ben is the owner of Sip & Spin, a coffee shop and record store that occupies an historic building which is known as the Roark Estate.

The building was the late-19th Century home of the business interests of Orien Roark, Muhlenberg County’s first undertaker. Orien also dealt in bicycles, furniture and early phonographs. On the second floor, Orien founded and printed “The Greenville Record” newspaper.

All of these businesses operated at the same time, in the same building, so to say Mr. Roark diversified his entrepreneurial interests is an understatement.

While Ben occupies the building today in partnership with his wife, Jennie, and mother, Teresa Gott, Barry stays busy producing local history book projects, the most recent of which is “United We Stand, Divided We Stood: How The American Civil War Impacted Muhlenberg County, Ky.” Josh wrote the foreword for the voluminous book and helped to edit before publication.