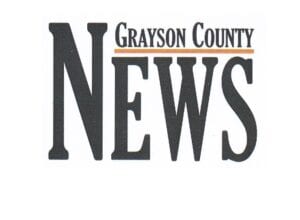 The Grayson County News-Gazette has combined its resources with The Record to create a new Grayson County weekly newspaper utilizing the staff of both products.

On June 8, Paxton Media Group completed its acquisition of  all 46 publications belonging to Landmark Community Newspapers, including The Record. PMG, a fifth-generation, family-owned business, is based in Paducah and had operated The Grayson County News-Gazette since 2017, which it acquired from Civitas.

To best serve the Grayson County community’s need for news and information, a decision has been made to combine the operations.

“Producing one healthy, robust product makes sense on a business level and in regard to service,” said Angela Mayes, regional publisher. “The two staffs will be fully integrated and all current subscription and advertising commitments honored during this transition.”

Customers subscribing to both products currently will receive a corresponding extension of their account.

The new product — to be distributed each Saturday  — will be known as Grayson County News.

“It’s a simplified name reflecting the 140-year history of serving all communities in the Twin Lakes region,” Mayes said. “It clearly defines the mission of our staff and promise to our customers.”

The new product, which debuts July 3, will draw from the two newspapers’ combined offerings and provide readers with local news and sports, plus popular features including the What’s Going On calendar, an extensive weather outlook and weekly TV listings.

The office of The Record at 20 Public Square in Leitchfield will serve as home to the combined operation. The two websites will be configured in the coming week to direct readers to a new online product.

Local news has been the heart and soul of our organization since we first started publishing newspapers in 1890, and for well over a century, we have worked diligently to bring the readers of Grayson County the most comprehensive local news and information possible.

The first paper in Grayson County, named The Grayson Journal, was printed in 1874 and moved to Brandenburg, KY in 1876.

Our website is providing even more news and information to all of our readers who have access to the internet. In addition to local news and events, we have integrated special contests, online polls, online magazines, and much more throughout the year. This is an exciting venture for us where we plan to share news and events from our regular print publication and use the power of the internet to interact with the community.

Background on the Leitchfield/Grayson Record – From The Record website

The Record is Grayson County’s largest newspaper and is published weekly on Thursdays.

It was founded Dec. 4, 1980, by Jennifer Searcy, and was purchased by Landmark Community Newspapers Inc. in 2002 and joined Paxton Media Group in June 2021.