The Lexington Herald-Leader has sued the city of Lexington, alleging that a new ordinance — which restricts where publications can be delivered — runs afoul of the First Amendment.

In addition to asserting that the ordinance is unconstitutional, the newspaper is asking a federal judge to issue an injunction stopping the city from enforcing the ordinance, which restricts the placement of unsolicited materials or circulars to a front porch, attached to the front door or through a mail slot. The Urban County Council voted 9 to 5 on March 2 to approve the ordinance. It is to go into effect May 1.

Susan Straub, a spokeswoman for the city, said Wednesday that the city can’t comment on active lawsuits. 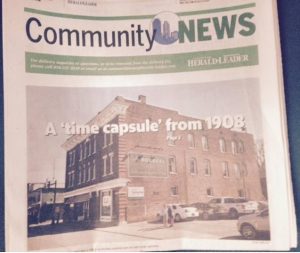 Community News is a free publication of the Lexington Herald-Leader, circulated in Central Kentucky

The suit alleges that the ordinance targets the Herald-Leader’s Community News, a weekly free publication that is distributed to more than 134,612 Central Kentucky households each week. The newspaper has said Community News provides news articles free to non-subscribers. It also contains advertisements.

“The ordinance, both on its face and in its intended effect, will interfere with the distribution of the Community News by prohibiting delivery through placement on business or residential driveways and other unauthorized areas,” the lawsuit says. “This interference will not only harm the Herald-Leader’s business, but will cause a more serious public harm by interfering with the dissemination of news and information.”

The council has debated for nearly two years what to do with unsolicited publications and fliers.

The original debate was prompted by the delivery of Community News. Some residents complained to council members that copies were creating a hazard and blight because the newspapers were found on sidewalks and streets.

Officials with the Herald-Leader previously told the council that they have worked with their third-party carrier to stop delivery of Community News for those who request it.

Some council members who voted in favor of the ordinance in early March said they still had concerns that Community News and other publications are creating a public safety hazard by ending up in the city’s streets and storm drains.