Here we go again! Something KPA received from USPS: A bin reserved for MAIL-IN BALLOTS 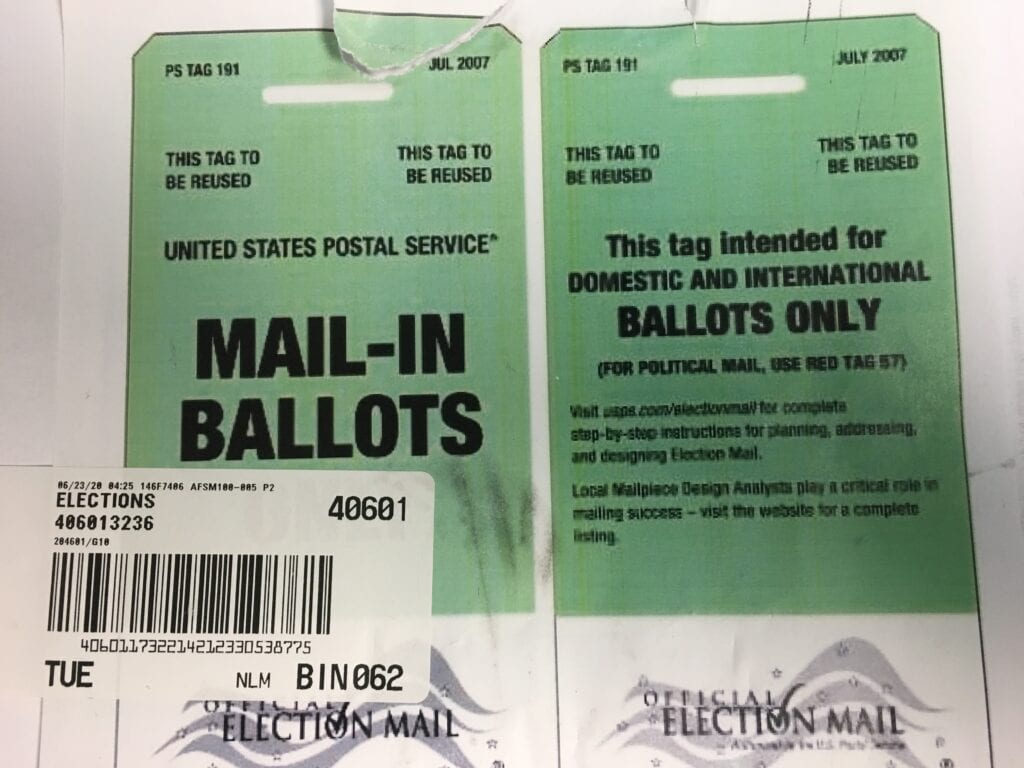 Two months ago, I wrote about the nine different newspapers we received at KPA, all dated in 2015. Something like 58 months it took for those papers to make it to the central office, and coming from all parts of the state — Middlesboro Daily News, Henderson Gleaner, Harlan Daily Enterprise, Mayfield Messenger, Benton Tribune Courier, Corbin Times Tribune, Hickman County Gazette, Danville Advocate Messenger and the Murray Ledger and Times.

Now comes another apparent USPS gaffe. One of the white bins containing Kentucky newspapers that we picked up a couple of weeks at the Frankfort Post Office was a bin especially reserved for ELECTION BALLOTS. Says so right on the green tags attached to the bin. And it was used for that purpose during the June primary. Check out the white sticker on the left with ELECTIONS 40601 on it.

What’s a little puzzling is that Kentucky hasn’t used mail-in ballots previously, at least none that I’m aware of unless by members of the Armed Forces. But the date on upper right of the green tag shows JULY 2007. So that PS TAG 191 has been something the post office has used for quite some time. And if you go to usps.com/electionmail you’ll find out this about Green PS TAG 191:

Green Tag 191
Tag 191, Domestic and International Ballots, is a green container tag used by election officials to identify trays and sacks of ballot mail destined for either domestic or international addresses. Tag 191 can be ordered online and mailed directly to local election offices.

On the right side green tag, the smaller print reads:

And below that a statement that “Local Mailpiece Design Analysts play a critical role in mailing success — visit the website for a complete listing.”

Guess now we await the next surprise coming in a white postal bin carrying Kentucky newspapers!