Hold your horses! Maybe it’s time to step back and take a breath

If you’ve heard me speak at a conference over the past two or three months, you’ve heard me discuss the differences between newspapers.
For someone as young as I am (no snickering, please), I have seen a lot of changes in our industry over the past 25 or so years.
Aside from the technological changes, which are obviously numerous, much has altered the way we think about newspapers.
As a speaker, I remember it was just a couple of decades ago we saw the “great divide” as an imaginary line separating paid­ circulation newspapers from free papers. In the “old” days (10 or more years ago), I was one of the few speakers you might find at both “paid” and “free” conventions. There was a general distrust between the two sides, and as consultant/trainer/speaker, you had to choose a side. Somehow, I became a fixture at both types of conventions and built a consulting career working with both types of papers.
Today, newspaper ownership is more of an indicator of how and what a newspaper is doing. The differences between paid and free papers has become fuzzier. It’s not unusual – it might even be more common – to see newspapers publishing both free and paid papers.
I often speak about my annual survey of U.S. and Canadian publishers, the most recent of which was just completed in April. At conferences, the thing that seems to surprise publishers more than anything else is how many things AREN’T changing at newspapers.
It’s easy to read social media posts and headlines about buyouts, closings and mergers, believing the entire industry must be in a flux. As I mentioned in my previous column, most papers aren’t going out of business any time soon. Interestingly, most publishers report their papers are doing just fine financially.
According to the 2019 survey of publishers, 85 percent of newspapers haven’t changed hands since 2015. And a large majority of newspapers that did change hands, moved from one group to another group (5 percent of newspapers) or from one private owner to another private owner (4 percent of newspapers).
In similar numbers to previous surveys, 56 percent of publishers reported their papers are locally owned, not part of any group …not even a small group.

I did not misspeak.
Only 15 percent of newspapers in the survey are part of large national (13 percent) or regional (2 percent) groups. So, while you  might feel like every paper is being bought by Gatehouse or Gannett or Adams, it’s just not the case. Sure, a few are. Maybe more  than a few. But, statistically, they are a drop in the bucket compared to the number of newspapers remaining in local ownership. 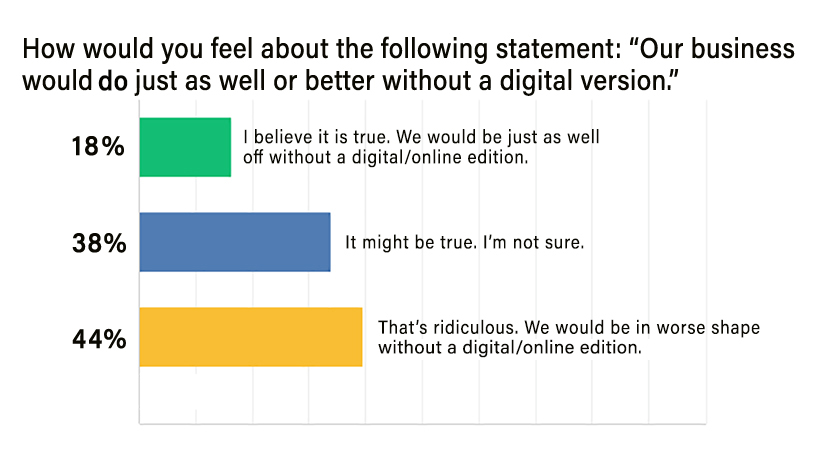 Another area that continues to stir confusion among publishers is the benefit of digital efforts. While most respondents feel it is  important to have a digital presence, 56 percent believe it either “is” or “might be true” that their papers would do just as well or better  without a digital/online version.
Don’t get me wrong. I’m not saying for a heartbeat that any newspaper should dump its digital presence. What I’m saying is  digital is not “the goose that laid the golden eggs” yet, assuming it ever will be.
Here’s how I see it. One of my businesses is a book publishing company. We’ve had some pretty big hits lately, including a #1  best seller (Where Do We Go From Here?) in May. In the book business, we know that approximately 90 percent of our sales will  come from printed books. Knowing that, we put the bulk of our efforts into producing the best printed books we can.
Still, the five to eight percent of revenue we receive from Kindle versions is worth the effort to create digital versions of our  books. We would never, however, release a digital version first. The printed version comes first, then the digital, because that’s  where the readers are, and the money is.
It appears, from questions related to income and profit, print – in newspapers – is still where the money is. Recent events at  newspapers in New Orleans is perhaps even more confirmation that print is still king, when it comes to newspapers. That may or  may not change ten years down the road, but for now it’s true.
Okay, I’m off my soapbox. What’s the moral of this column? Your paper probably isn’t so different from most other papers.
Relax. Enjoy the view. Most papers are doing fine financially. Not all, but most. If you’re like most, you’re doing just fine. Don’t  feel like everybody else knows something you don’t. Enjoy the experience and put out a good newspaper.