From the Speed Art Museum 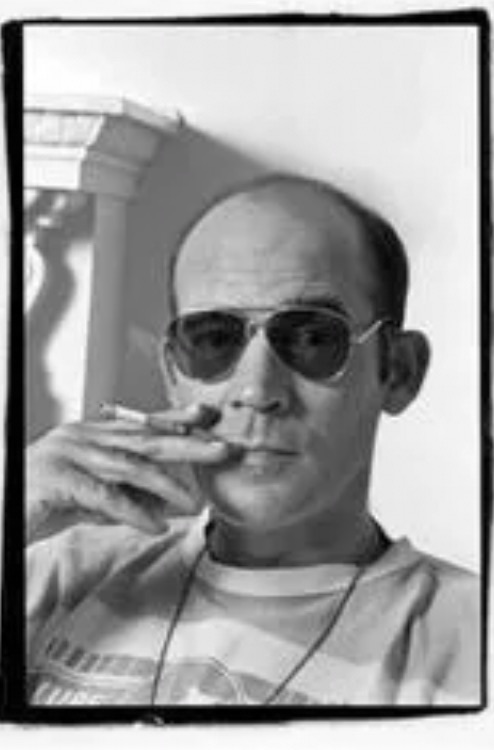 This summer, the Speed Art Museum will present an exhibition centered around one of Kentucky’s most famous exports, writer Hunter S. Thompson. A lynchpin in the world of modern investigative journalism, Thompson’s approach to reporting would not only lead to the creation of the unique “Gonzo” style but would serve to change his medium forever. Gonzo! will take a closer look at the professional and personal collaborations that Thompson enjoyed with the artists and photographers who were tasked with illustrating his work and articulating his unique voice through visual means.

Thompson died in 2005 and was posthumously inducted into the Kentucky Journalism Hall of Fame in 2014.

By narrowing the scope of the exhibition to the decade between 1964 and 1974, Gonzo! will track the peak of Thompson’s rise to success from his first major independent work in long-term investigative reporting, Hell’s Angels: The Strange and Terrible Saga of the Outlaw Motorcycle Gangs, to his sardonic analyzation of the Nixon campaign, Fear and Loathing on the Campaign Trail ’72. The works produced within that decade led to the Thompson’s development of Gonzo journalism – a subjective, socially critical, participatory style of writing that helped to define the American cultural and political landscape of the late 1960s and early 1970s.

Among those featured in the exhibition are world-renowned artists Tom Benton, Annie Leibowitz and Thompson’s long-time creative partner, Ralph Steadman, as well as photography from Thompson himself. Photographs, drawings, prints, letters, documentary footage, and other ephemera make it possible to study the working methods and creative processes of Thompson and the artists who brought his words to life. The exhibition will make a close examination of process and the inimitably symbiotic relationship that exists between writer and illustrator pairings like Steadman and Thompson, whose famous partnership began when Scanlan’s Magazine shipped the duo to Thompson’s hometown, tasked with covering the 1970 Kentucky Derby.

Gonzo! An Illustrated Guide to Hunter S. Thompson is the last of three “Gonzo”-related exhibitions taking place in central Kentucky as part of the Year of Gonzo. The first, Ralph Steadman: A Retrospective, was on view at the University of Kentucky Art Museum until May 5, while the second, Freak Power: Hunter S. Thompson’s Run for Sheriff, is currently on view at the Frazier History Museum. Those who visit all three exhibitions and retrieve a novelty pin from each will receive a custom designed notebook.

In celebration of the exhibition’s beginning, the Speed Art Museum is partnering with GonzoFest Louisville, the annual literary and music festival honoring Hunter S. Thompson.  The Museum’s monthly After Hours @ the Speed event on July 19 will serve as the official kick-off for the festival, featuring a panel conversation between Hunter’s son, Juan Thompson, Kentucky author Ron Whitehead, moderated by WFPL President Stephen George, as well as a gallery talk with Curator Erika Holmquist-Wall and Hunter S. Thompson scholar, Dr. Rory Feehan, and live music highlighting the songs of Thompson’s most prolific decade