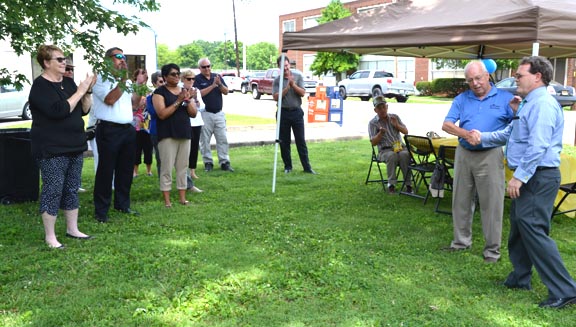 The National Newspaper Association had just informed Taylor that Chip will receive its coveted Amos Award at the NNA Convention this fall. It’s one of the two most prestigious awards NNA presents.

Taylor (far right, above) congratulates Chip on the selection.

Chip is the second Kentuckian to ever receive the Amos Award. Max Heath, also a KPA Past President who has made his mark with the industry as chair of the NNA Postal Committee, received the award in 1994.

The Amos Award was established in 1938 by E.C. Amos, publisher of The Sidney Daily News, to honor his father, General James O. Amos, a pioneer Ohio journalist and an early-day member of the National Editorial Association. Amos purchased the Shelby County Democrat in 1876, the predecessor of The Sidney Daily News that was started in 1881 but has passed from the Amos family ownership.

Every year, the National Newspaper Association announces the Call for Nominations for the Amos and McKinney Awards, which are the highest honors awarded to working and retired newspapermen and women who have exhibited distinguished service to the community press.

The Amos Award will be presented to Chip during the 131st NNA Annual Convention, October 5-7 in Tulsa, OK.

Here’s the nomination criteria for the Amos and the McKinney awards.