LOUISVILLE, Ky. (KT) – A longtime Kentucky journalist and former managing editor of the Western Recorder has been named the interim communications director for the Kentucky Baptist Convention. 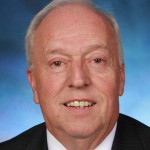 Chip Hutcheson will begin his new duties with the KBC on Sept. 1. He has worked with the communications department for the past two years. He replaces Brandon Porter, who resigned to take a media leadership position with Baptist Press in Nashville.

“Chip’s 50 years of experience in the communications field, 41 of those as a newspaper publisher, and 2 ½ years on the Mission Board staff, in addition to his extensive involvement in Kentucky Baptist life more than qualify him to assume this role,” said Jim Donnell, associate executive director for convention operations. “We are truly blessed that the Lord has placed Chip here for such a time as this.”

Dr. Todd Gray, executive director-treasurer of the Kentucky Baptist Convention, said Hutcheson’s vast experience along with being “one of us” makes him the right choice to guide the communications team.

“I was living in Hopkinsville when Chip Hutcheson stepped in to assist The Kentucky New Era newspaper and watched as he helped them during their transition,” Gray said. “Chip knows and loves Kentucky Baptists. He is one of us. He will do an outstanding job in this role. We are grateful for God’s providential care for us in providing Chip to step in at this time.”

Hutcheson worked for 41 years as a newspaper publisher in Princeton. He owned and operated The Princeton Leader from 1976 to 1992, when he and a competing weekly newspaper sold to the Kentucky New Era Media Group. Hutcheson remained as publisher of the merged operation, which expanded to a twice-weekly publication. He retired June 30, 2017, after surrendering to the ministry six months earlier.

He served as president of the Kentucky Press Association in 2010, and the following year was named the association’s most valuable member. In 2012, he was inducted into the Kentucky Journalism Hall of Fame.

He served as president of the National Newspaper Association (NNA) in 2016, being only the second Kentuckian in the association’s 134-year history to serve in that role. In 2017, Hutcheson was the recipient of one of NNA’s most coveted awards, presented to a working or retired newspaperman who demonstrated distinguished service and leadership to the community press and the community where they live.