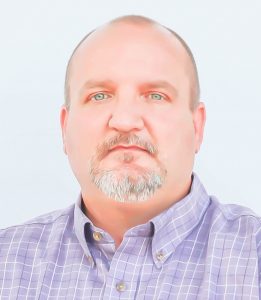 Vice President Mike Pence came to Kentucky on Thursday. Came to Manchester, Kentucky, and like any weekly newspaper, or any newspaper for that matter, when a VP is making an appearance in your community, you want to cover it.

So was the desire of Mark Hoskins and the Manchester Enterprise. On Wednesday, Mark found out about how to make a request for credentials to cover the event and thought that might get him access. Thursday morning, he found out his request was denied. He wouldn’t be allowed to cover the VP when time came to be in Manchester. 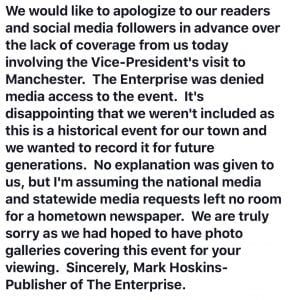 Like any newspaper, Mark, who is the KPA Board of Directors member for that district, wrote about it. On Facebook. That’s it to the right.

He emailed me to let me know his credential request had been denied and then sent me a copy of his Facebook Post.

But here’s the clincher. With 15 minutes of that Facebook Post, Mark received a call. They had apparently reconsidered and would issue him credentials to cover the VP.

Though it came with a caveat.

Here, let Mark’s email to me explain it:

‘Within 15 minutes after I made this post I get a phone call we are credentialed for the event.  ‘But would you please remove the Facebook post?’ they asked!!”

Mark’s reply: “Yes I removed.  Gov press secretary claimed we had been credentialed but I responded with why didn’t we receive the confirmation?  We received two passes and I had a photographer attend.  I watched the live feed and refused to attend since they waited less than an hour before our required time to be there to say we were credentialed.  In my request I did note that we were the hometown newspaper of the host city.  Personally, I think since they asked me to remove it we only were credentialed to avoid negative publicity.  They can’t prove that’s not true because we didn’t receive a confirmation!  LOL”