If you see a UPS golf cart delivering packages, it’s not a mirage 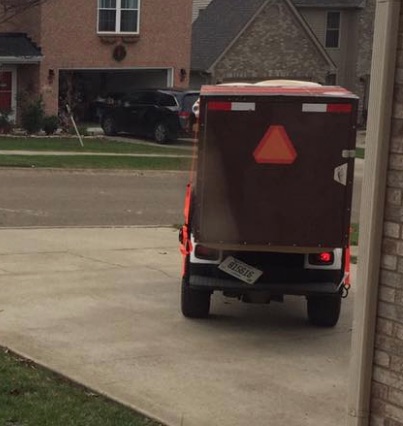 I don’t know how widespread the use of golf carts by delivery companies has become, but I know it’s being used in Georgetown. My daughter snapped this photo of a UPS golf cart leaving her driveway Thursday after dropping off a package.

So if readers or a staff member report golf carts delivering packages, they are not crazy. It really is happening and all because of legislation that went into effect June 29 of this year.

As originally introduced, HB 404 would have applied only to one company (UPS) but amid protests from legislators that it was perhaps unconstitutional that only one company would benefit, changes were made along the way. It originally required a company to have 10,000 employees to be eligible to use the alternative delivery method. But that was changed as legislators voiced concerns about companies that would be qualified under the initial version and was amended to require just 2,500 employees.

The final vote in both chambers went pretty much along party lines. It was approved by the House 61-36 and then 25-13 in the Senate.

So when you see a golf cart buzzing through the neighborhood, it’s not a golfer whose tee shot went wayward. It’s a delivery company personnel making his or her rounds to make sure packages get to their destination without having to use the larger truck on narrower streets.

Click on this link to read House Bill 404 as approved by the Kentucky General Assembly during the 2017 session.  Specifically, the new law is KRS 189.283.

When the session ended, the Public Information Office of the LRC sent out a news release about transportation-type legislation approved in the session, including reference to HB 404. Here’s the text of that release:

New transportation laws being rolled out

Legislation addressing these three types of vehicles were among the transportation-related bills passed during this year’s regular session of the Kentucky General Assembly, said Rick Taylor, the deputy commissioner of the Department of Vehicle Regulation. He testified on the progress of implementing these and other transportation-related bills into law during yesterday’s meeting of the Interim Joint Committee on Transportation.

One of the first updates state legislators received was on House Bill 410. Known as the REAL ID Bill, HB 410 was written to bring Kentucky into compliance with the federal REAL ID Act by Jan. 1, 2019, and will by far affect more Kentuckians than the other transportation bills discussed at the meeting.

Taylor said he expects to hear by July 10 whether the Department of Homeland Security will extend a waiver allowing Kentucky to remain in noncompliance with the federal act until the new state driver’s licenses are available.

“Everything has been positive,” he said in reference to the extension request. “I don’t have any reason at this time to feel uncomfortable about that.

Taylor said Kentucky will begin soliciting bids on Sept. 1 from companies able to produce driver’s licenses that meet the federal security requirements. The goal is to have a company selected by Jan. 1, 2018. He added that will allow time for the new licenses to be rolled out across the state’s 120 counties.

“We will ask you to keep us up-to-date as this progresses because we have all lived through this controversy and the issues,” committee Co-chair Sen. Ernie Harris, R-Prospect, said in reference to a vigorous debate that took place about the best way to bring Kentucky into compliance.

The other transportation-related bills legislators received updates on include:

·         House Bill 192 makes it easier for 16- and 17-year-olds in foster care to apply for driver’s permits and driver’s licenses. State officials have already drafted a nine-page application to ensure a child’s eligibility and a letter for foster parents to give local driver licensing clerks. Transportation officials said it will take a little longer to solicit bids for car insurance to cover children in the state foster-care system but who are not living with foster parents.

·         House Bill 404 creates a commercial low-speed license plate for golf carts and other utility vehicles used for deliveries. It ensures that the vehicles have commercial insurance on file with the state. Transportation officials hope to have the license plates available by the middle of September so delivery companies can have the golf carts ready to deploy during this year’s holiday shopping season.

·         Senate Bill 73 lays out guidelines on how autocycles, a type of three-wheeled vehicle growing in popularity, are to be licensed, taxed and insured. Transportation officials said the guidelines should be finalized by July.

·         Senate Bill 176 allows for Humvees and other demilitarized vehicles to be licensed for use on public roads by the general public. (There is already an exception carved out for law enforcement.) The state began getting requests from civilians for such licenses after the Pentagon started auctioning the camo-covered, husky, troop-transporting High Mobility Multi-purpose Wheeled Vehicles (HMMWV) to civilians in 2014. Transportation officials said they are on track to begin issuing the license plates for the vehicles on July 1.

One Kentucky record tradition keeps on during Jan. 20 InaugurationPostage increase goes into effect SundayMy sister had to do some reading; I wanted to make her but then she already had done it