If the name sounds familiar — Taylor Cusick — that’s because you read about him a few weeks ago in On Second Thought. Taylor’s plan is to head to Louisville to begin learning about a career in pro wrestling. If that doesn’t pan out, he’s always got his journalism background to fall back on. This is Taylor’s “What I Did This Summer” contribution that we ask all KPA interns to write.

If I said my summer had been interesting, that would be a gross understatement. My time at the Cynthiana Democrat has been an eye opening experience in more ways than I could possibly articulate. 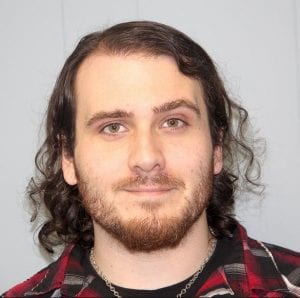 Like a lot of people from elsewhere in Kentucky, my only knowledge of Cynthiana was based on it being the setting for the Walking Dead comics, and I had even forgotten about that until I was reminded by the staff at the Democrat. As neat as the Walking Dead may be, I was pleasantly surprised to find out Cynthiana isn’t a haven for human munching zombies, but instead a rare gem hidden in the tip of Kentucky.

What struck me immediately about Cynthiana was the small town hospitality. Having come from Harlan County myself, I enjoy the politeness people in small towns seem to exude that some city dwellers seem to lack. I think part of the reason for that hospitality as far as Cynthiana goes is the city’s wonderful fascination with the arts.

How could someone be in a bad mood when you pass by the huge mural of the Walking Dead cast, or see tiny fairy doors hidden around town. Or how about finding painted rocks with hidden positive messages? The love for the arts in Cynthiana seems to be infectious, and so does the good mood.

I’ve met some incredibly interesting people while in Cynthiana and as a result I’ve had the opportunity to write some wonderfully fun stories. I got to tour some fantastic factories and see how things like Post-it notes are made. I got to write stories about former drug addicts. I got to see how school’s rules are made through school board meetings, and I got to learn from an extraordinary staff of individuals in the process of it all.

The staff here at the Democrat have been some of the most helpful people I have ever encountered in a workspace. They have taken me in and helped me develop my writing even further than I was able to at Eastern Kentucky University. The transition to writing about a city instead of a University is one that I was nervous about, but thanks to the helpful staff at the Democrat it has been painless and easy.

Cynthiana really strikes me as a family oriented town, and that family feeling resonates within the halls of the Cynthiana Democrat. Democrat reporter Lee Kendall buys his co-workers McDonalds once a week, and it isn’t uncommon for someone to come in with a delicious box of doughnuts. I’ve enjoyed my McDonalds and my doughnuts almost as much as I’ve enjoyed the chance to learn from a staff of incredibly kind and talented people.

If there’s anything I take away from this summer as a whole, it’s that you have to work hard to achieve your goals. This summer I graduated from college and began building my adult life. While my dreams are deeply rooted in the world of professional wrestling, my time with the Cynthiana Democrat has been one of the most surprisingly wonderful stepping stones I have ever set foot upon.

As I continue to walk the path of dream-chaser, I will forever keep with me the things I learned while at the Democrat. Though I won’t miss getting up at 7 a.m. to make the hour drive from Lexington to Cynthiana, I will absolutely miss the people of Cynthiana, and the staff at the Democrat.