From the Ashland Daily Independent

Julianna Leach has a bright future ahead in journalism. 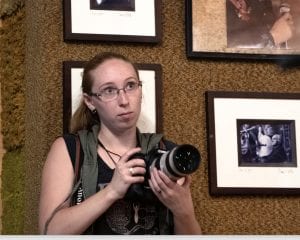 The 21-year-old Ewing, Ky., native just completed a highly successful paid journalism internship at The Daily Independent offered through the Kentucky Press Association. The internship for the student at Morehead State University allowed Leach to cover stories all across Eastern Kentucky, from Van Lear, to Ashland to Carter County as she interviewed area residents, took photos and told their stories.

“I was really excited to learn about the counties surrounding Rowan,” Leach said. “It was a great opportunity.”

Executive Editor Glenn Puit said Leach is an extremely talented journalist who excelled at the newspaper.

“We were very honored to have Julianna working with us,” he said. “She is a shining star already. We all look forward to watching her career unfold. The sky is the limit for Julianna.”

Leach covered a diverse string of stories, took photos and also produced video for the newspaper’s multi-media platforms. One story documented the existence of endangered bats at Carter Caves. Another popular story detailed tours of Loretta Lynn’s old home in Van Leer. She was also assigned to cover local governments in Carter and Greenup counties.

“I really enjoyed being able to meet all sorts of people and to learn more about all the communities that are so close to me,” Leach said. “I think my writing has improved since I started the internship and I’ve also seen a difference in my photography since I started. I’ve continued working every day with my camera. It has made a difference.”

Leach is a senior at Morehead State. Her goals for the future are to continue in journalism and “to always continue working with photography. That seems to be where my heart is.”