Editor’s Note: Back in 1993, KPA established an internship program with newspapers. Until that time, KPA was giving scholarships to help students defray the cost of their education. Students used the funds, $1,000 per year, as they were meant but after graduation, they were doing anything but trying to find a job in the newspaper industry. We felt with an internship, if we could get them in the newsroom or advertising department and show them the real world of journalism, we stood the chance they’d want to work in the business. It’s worked well and a majority of the interns have said the program turned their heads toward seeking a job with newspapers. Emily Adams interned this summer at the Corbin Times-Tribune and her “What I Did This Summer” reflects that internships are serving their purpose. 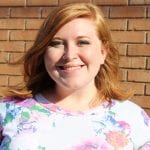 I thought my one semester writing for SCC’s student publication had prepared me for what it would be like working for an actual newspaper but it didn’t even come close–especially going from a monthly publication to a daily publication.

My experience at The Times-Tribune has been exactly that–an experience.

I couldn’t tell you everything there was to tell about my eight weeks at The Times-Tribune. Some days I wouldn’t move from my desk and some days I would be taking selfies with Ric Flair. No day was exactly the same and each day was a learning experience.

I quickly learned that news can happen at any time, even when you’re on your lunch break and not at all prepared. I learned to always pack your camera and an umbrella with you. I learned the ins and outs of the newsroom, something I could have never learned without this internship.

I feel as though this internship allowed me to come out of my shell. My colleagues quickly became my friends. I established relationships with people I had never even met before. I shook a countless number of hands and learned more names than I can remember. I participated in events I would have never had the chance to participate in. I grew not only as a journalist but as a person.

I’m thankful for my time at The Times-Tribune, the friends I have gained along the way and all the knowledge I will be taking with me as I further pursue a journalism career.