Internship was far beyond typing obits and classifieds 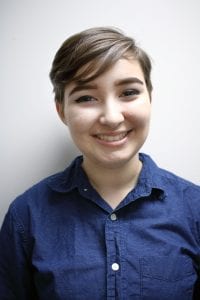 On my first day on the job as an intern for the Kentucky Standard, I was told multiple times that Bardstown was a “news-rich environment.” As a Louisville native and an Indiana University student, I wasn’t sold on how “news-rich” a town of less than 12,000 people could be. Over the course of nearly 10 weeks, Bardstown taught me better.

I had reported on mostly politics for the Indiana Daily Student. I started with student elections and then moved toward general election reporting, covering a blue campus in a red state. At the Standard, I had the chance to break out of that mold and truly experience everything the community had to offer. I covered crime and its aftermath, education reform, local theatre, and, of course, bourbon.

It took time to adjust to a 9-5 schedule and a staff smaller than a student paper, but the long hours allowed for more in-depth stories, and the small newsroom helped me learn directly from other reporters rather than being overwhelmed in a building teeming with busy journalists. While it wasn’t what I had pictured as a typical newsroom, it was better than I could have expected.

I had thought I would be some sort of secretary, dutifully typing obituaries and classifieds for weeks. An intern is someone who runs to Starbucks every morning and makes copies. It’s an unappreciated position in an economy that pays young adults in experience rather than money as the cost of living rises. But when I was assigned to cover the vigil of a slain teenager my second day on the job, I realized these wouldn’t be 10 weeks to blow off.

Working at the Standard broadened my perspectives on what small town life could be like. The commute from Louisville takes me past cow farms and gas stations advertising country ham, but the city teaches newcomers not to pre-judge.

When I made the career decision this spring to find an internship instead of a typical teenage summer job, I was almost reluctant. I had had good jobs where I was comfortable, and I wasn’t certain how I would be received by the Standard with so little experience under my belt. Now that my time is almost up, I feel confident going into any other journalism courses and jobs.

For the rest of the summer, I can turn off my three alarms and wake up after the sun has risen. But the thought of not driving by cow pastures every morning is a little sad. The Standard sharpened my skills and welcomed me with open arms. I return to IU this August for another year of classes. But who’s to say that somewhere down the line I won’t find myself back in Bardstown?

Chris is the daughter of John Mura, KPA Past President.