Into the Issues: Daily reporter turned small-town publisher still won’t back down from Open Records battles 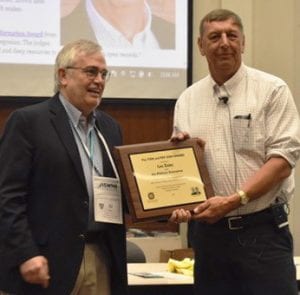 Small, rural newspapers can win open-records battles with state agencies and beat larger news outlets at covering big stories in their communities, says a journalist who spent most of his career at a metropolitan daily but has returned to the business of publishing a rural weekly.

Les Zaitz, publisher of the Malheur Enterprise in eastern Oregon, made those and other points as he spoke to the annual conference of the International Society of Weekly Newspaper Editors in Portland, Oregon, on July 12.

Between his ISWNE presentations, Zaitz accepted the 2018 Tom and Pat Gish Award for courage, integrity and tenacity in rural journalism from the Institute for Rural Journalism and Community Issues.

Zaitz talked about how the Enterprise pursued the story of a former state hospital patient’s involvement in two murders and an assault in Malheur County shortly after his release. The newspaper discovered that the defendant had been released after convincing state officials he had faked mental illness for 20 years to avoid prison, and after mental-health experts warned he was a danger.

The state Psychiatric Security Review Board sued Zaitz and the Enterprise to avoid complying with an order to turn over exhibits that the board had considered before authorizing the man’s release. Zaitz started a GoFundMe effort to pay legal fees, but then Gov. Kate Brown took the rare step of interceding in the case, ordering the lawsuit dropped and the records produced.

He said lessons from the episode include: “Even if you’re small, don’t back down from a fight like this. . . . Success in a fight like this depends a great deal on your institutional credibility; they knew that once I sank my teeth into their ankles I wouldn’t let go, because of their experience in prior instances” when he was a reporter at The Oregonian in Portland.

Probably the most important lesson, Zaitz said, is to “bring your community along as the fight heats up. Let them know that we’re not doing it for journalistic prizes. … tell the reader, we’re doing this for you’ this is information you deserve.” He said the news media have done “a terrible job as a profession of bringing our community along and explaining the profession,” but people are still thanking him for taking on the state.

“This fight, and the success and the propose of it, to me, was in the pursuit of the finest ideals of the profession, the pursuit of truth and justice,” he said. “We have to always never, never relent in the face of opposition from government. If we don’t stand up to the government, who will?”

Zaitz said the board’s new executive director is moving to again restrict access to such records, so “I don’t know what kind of brawl I’ve got ahead.”

He also didn’t know what he was in for when armed militants seized the office of the Malheur National Wildlife Refuge on a Christmas-week Saturday, when it was unoccupied, to protest the convictions of two ranchers for arson on federal land. (President Trump pardoned them two days before Zaitz’s presentations.)

“I was on a glide path toward retirement at The Oregonian and the last thing I needed was another major assignment,” Zaitz said, but he lived in the area and was the natural point man.

The standoff lasted 41 days, and Zaitz led the coverage of it, but he said the experience has lessons for smaller newspapers like Harney County’s weekly Burns Times-Herald, the paper closest to the refuge, which “decided to stay our of the coverage for the most part” though Burns was “overwhelmed” by the influx of militia types, news media and law enforcement.

“Your access is one of your primary advantages” in covering a big story, Zaitz said. You’re known in your local communities; you are presumably trusted. … Even in the face of a major news event, where you are being swamped by out-of-towners, that is an asset you cannot overlook.”

To stay on top of the story, you must report it when news happens, Zaitz said: “You have to own the audience … online, driving information out. … We reacted to rumors; we would go online and knock those rumors down. … It just makes you indispensable to your audience.”

Think ahead, he advised: “Plan for a major news event. . . . It will pay huge dividends.” Ask questions such as, “What’s your battery supply? Where do you get water for your reporters in the field when the water is contaminated?”

Turning such challenges into opportunities is essential for local news media, Zaitz told the weekly editors, meeting at Lewis & Clark College: “In the current environment, what we do has become so important that our societies are turning to local news as, frankly, the only news that they can trust. That’s a major, major issue in this day and age. … they know you, they know your organizations, so you need to help build that trust, and build on that trust, to give … some refuge from the storm of fake news. People are feeling whiplashed, they are feeling misled.”

Zaitz said his experience as publisher of the Enterprise, where circulation has doubled to 1,500 since his family bought it in 2015 to keep it from closing, has affirmed his core belief “that readers wanted nothing more than solid, local information” about how their tax dollars are being used. He said he told a reporter not to spend three hours at a school-board meeting, but spend that much time finding out why the local high school’s graduation rate is declining.

Al Cross edited and managed rural newspapers before covering politics for the Louisville Courier Journal and serving as president of the Society of Professional Journalists. He is director of the University of Kentucky’s Institute for Rural Journalism and Community Issues, which publishes The Rural Blog at http://irjci.blogspot.com.