Al Cross edited and managed rural newspapers before covering politics for the Louisville Courier Journal and serving as president of the Society of Professional Journalists. He is the extension professor of journalism at the University of Kentucky and director of its Institute for Rural Journalism and Community Issues, which publishes The Rural Blog at http://irjci.blogspot.com.

The main issue facing the country and most of our communities is what it has been for more than a year: the coronavirus. We are in what is almost certainly the last chapter, immunization – but this chapter may last a lot longer than it should, and make the economic recovery slower, because so many Americans are pandemic-fatigued, ill-informed about vaccines, and reluctant to get a shot, or even resistant.

Respected voices of authority, like newspapers, need to promote public health. We’ve been doing that on The Rural Blog at irjci.blogspot.com. Recently we had an item (at tinyurl.com/yab6h5nk) reporting that vaccination rates among rural adults are fairly close to urban rates, but rural seniors are falling farther behind their urban counterparts.

Rural seniors are the most loyal readers of community newspapers, but there are many other vaccine-hesitant or -resistant groups that need reliable information about immunization. Community papers are some of the best vehicles for that information, because they enjoy a higher level of trust than other news media.

They also have the ability to reach every household in their home counties, through sample copying that can be supported by advertising or sponsorship. Early in the pandemic, some newspapers partnered with governments to deliver coronavirus information through sample copies, and now seems like another good time for it, since so much misinformation is out there and local governments are getting billions in relief money.

The effort to overcome misinformation is a story in itself, as Alex Acquisto of the Lexington Herald-Leader showed in a long story about pastors in Harlan County, Kentucky, who “gently bat down . . . fear-based questions” about coronavirus vaccines. We excerpted it at tinyurl.com/2fwhxcwb. It’s the sort of story that could be done in just about any community, and not just about clergy; what are health-care professionals, elected officials and civic leaders doing?

Speak up for public notice: The annual battle to preserve paid public notices in newspapers is on, and it’s more important than ever because “the legals” have become a more important source of revenue. But we have a new argument, the value of local newspapers as proven by the pandemic. And that case can be made not just in state capitals, but at the local level, especially if local officials appreciate the value of the newspaper.

“Never has the importance of community newspapers been more apparent than during the last very difficult year. [They] have ensured that their readers have the facts about Covid-19: about the efforts to combat it, the decisions made by public officials and local businesses to guard against its spread, the number of cases that are occurring in their community, and the lives have been lost or changed by it. . . . The reporting has been arduous, time-consuming and often heartbreaking. It is done at great cost to owners and publishers, at a time when newspapers are struggling from financial losses that resulted from economic slowdown and the pandemic. We are fighting for life, like many other small businesses that provide jobs and paychecks, that pay taxes to enable the good work our government officials do, and that are the heartbeat and life of their communities in so many ways.

“Taking away one more reliable source of revenue that enables us to perform that essential role may well be the death knell for many community newspapers. Far worse, it will be a fatal blow to public transparency and accountability, and an open door to government corruption. Public notices in community newspapers do get read. Their publication is monitored and verified by an independent source, and their content is often examined, explained and expanded upon by the newspaper that publishes it.”

Jail deaths and money: Small jails already had some of the highest death rates in the nation, and the pandemic has surely made that worse. The federal government is slow to report deaths by jail size, but as of 2012, “Mortality rates were highest in jails holding a daily average of fewer than 50 people,” Katie Rose Quandt reported for The Atlantic, noting that since 2008, jail populations in rural areas have risen 27 percent.

That’s partly because some local governments have found it profitable to house state and federal prisoners, and taxpayers may appreciate that. But the Vera Institute of Justice, which favors reform of jails and bail, says jails are increasingly on the front lines of mental health, addiction and homelessness in rural communities, and they’re not very good at addressing those issues. Quandt’s story was comprehensive, and our Rural Blog item about it was about twice as long as usual, 950 words. You can read it at tinyurl.com/njb9762e.

Quick survey: Research on rural journalism and small-town newspapers is lacking. Tony Baranowski of the Iowa Falls Times Citizen is trying to fill some of the gap with a survey of rural newspaper publishers, to wrap up his work in the NewStart program at West Virginia University. Because such research is relatively rare, it’s important that he have a broad sample. The survey has 19 questions, is easy to complete via SurveyMonkey. Tony would like to wrap it up in about two weeks. The heart of it is about revenue, so it’s designed for publishers, but in community journalism the publisher and editor roles often overlap, so editors should feel free to take a look. It’s at surveymonkey.com/r/SXGZ7BH. 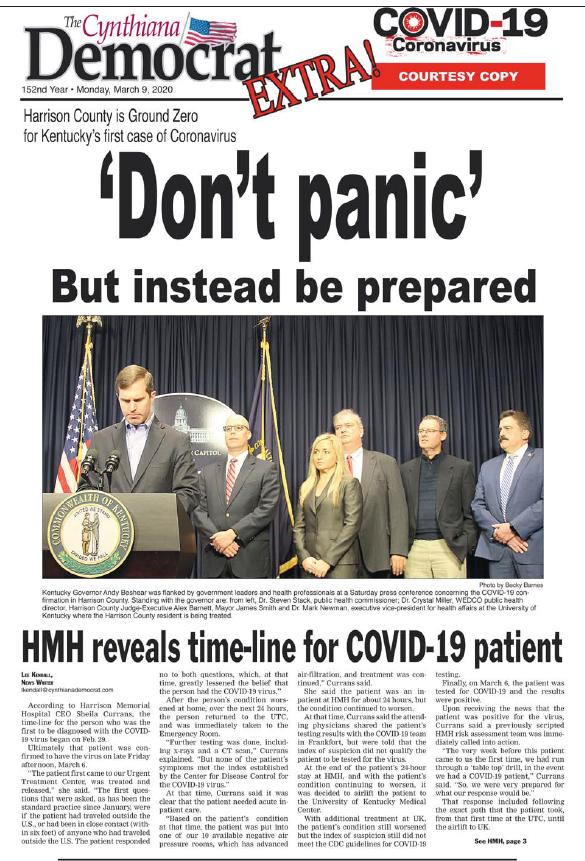