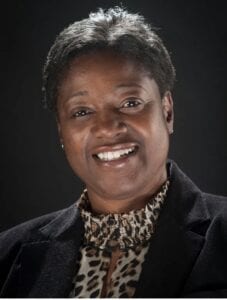 Mary Irby-Jones, a veteran journalist who stresses community outreach, was named the top editor of The Courier Journal on Tuesday.

She said it will be an “honor” to become executive editor of the news organization, which has earned 11 Pulitzer Prizes, including one for breaking news in 2020.

“The Courier Journal has a long, well-deserved reputation of producing compelling and award-winning journalism,” Irby-Jones said. “I am excited to build upon its groundbreaking work and for the opportunity to engage with the Louisville community.”

She will be the first woman and second African American to lead The Courier Journal. Her first day on the job will be March 15.

Amalie Nash, senior vice president for local news for the USA TODAY Network, said local journalism has never been so important “and we know Mary will work tirelessly to ensure the Louisville community and state of Kentucky benefit from the kind of high-caliber accountability journalism that is the cornerstone of our democracy.”

“We’re thrilled to have someone with Mary’s journalistic background, commitment to community and relentless focus on evolving our business as the next editor of The Courier Journal,” Nash said.

Irby-Jones, 54, previously was the top editor of both the Gannett-owned Clarion Ledger and Hattiesburg American in her native Mississippi.

At The Courier Journal, Irby-Jones said she will “support the really great journalism that is already being done. I do believe that I can come in and help that great work and make sure we continue that legacy.”

Under her leadership, The Clarion Ledger revealed that Mississippi denied welfare to thousands of people while showering that money on a nonprofit that spent millions of dollars on advertising, steak dinners, resort hotels, plane tickets, lobbying and a Christian rock concert. It also found that, related to that embezzlement scheme, taxpayers would be on the hook for a $14.5 million children’s hospital that was to be privately funded.

Before taking over the two Mississippi papers, Irby-Jones worked as the digital director for The Clarion Ledger in Jackson, where she oversaw a regional digital operation for eight newsrooms in the Deep South. She returned to Gannett in May 2019 after 12 years of working for Cox Media Ohio in Dayton, Ohio, where she oversaw a 24/7 digital team for three Ohio newspapers and WHIO-TV and Radio. She also was senior editor of The Dayton Daily News and managing editor for WHIO-TV.

In Louisville, she replaces former Editor Rick Green, who stepped down in December after taking a buyout following 2 ½ years at the helm of The Courier Journal.

The significance of taking over the news organization at this moment in history was not lost on Irby-Jones.

“At this point in time, there’s a lot that our country is going through in the way of conversations about race and also about disparities in underserved communities and just all the different challenges that we’re having as a nation,” she said. “And I really feel like that being in Louisville at a time when the community is still in the process of healing after the police killing of Breonna Taylor … I really do feel like I can make a difference in the community.”

Nick Hollkamp is the breaking news editor. He can be reached at nhollkamp@courierjournal.com. Follow him on Twitter at @nhollkamp_CJ.