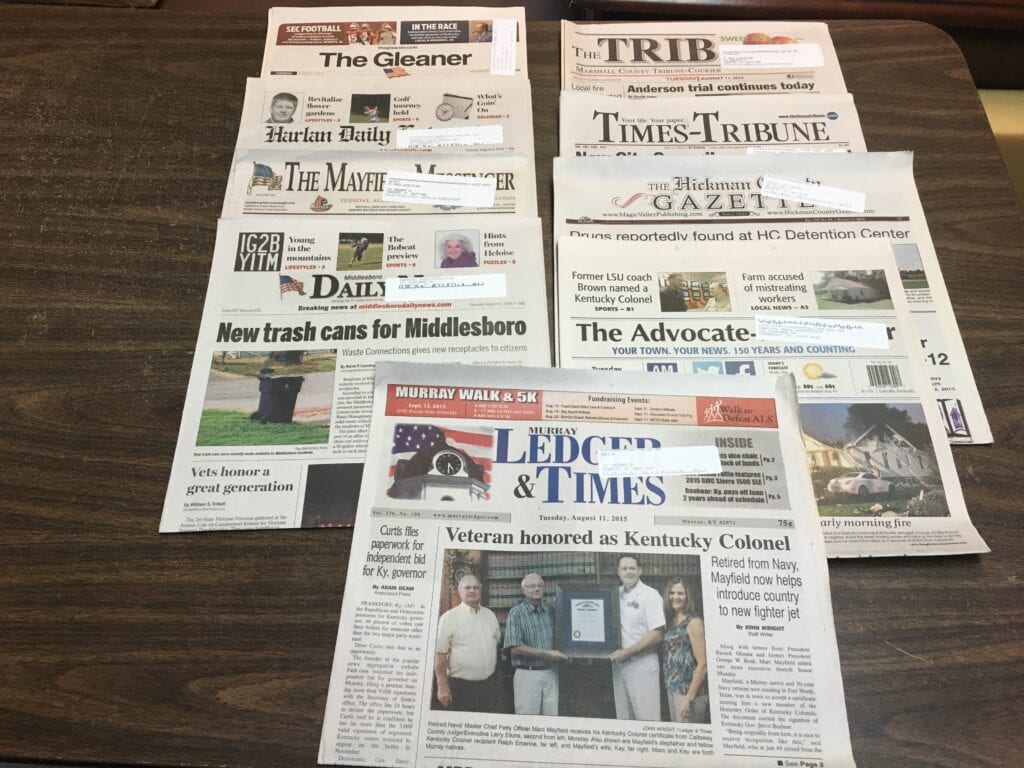 Monday began just like every other day for KPA assistant bookkeeper Holly Willard. She picked up the tubs of newspapers at the post office and when she got to the office she started sorting newspapers from Friday, Saturday, Sunday and Monday.

Holly sorts the papers and pulls tearsheets for the ads KPS places so you can imagine she has to turn every page of every newspaper to get the tearsheets so she can invoice clients. She had the Middlesboro Daily News on the table, turning pages and for some reason, when she got the sports page, she noticed the lead story talked about the 2015 Bell County High School Bobcat football team. Yes, 2015. She figured it was a typo but still checked the folio at the top. It showed 2015. August 11, 2015, in fact.

As she pulled other papers from the bins, she decided to check the publication dates. Chances are practically nil there would be any more August 11, 2015, papers in the tubs. After all, that’s right at five years ago.

To her surprise, Middlesboro wasn’t the only August 11, 2015, paper in the pile. By the time she finished sorting and checking tearsheets and double-checking dates, nine Kentucky newspapers were included, all with August 11, 2015, dates.

Middlesboro, Henderson Gleaner, Harlan Daily Enterprise, Mayfield Messenger, Benton Tribune Courier, Corbin Times Tribune, Hickman County Gazette, Danville Advocate Messenger and the Murray Ledger and Times. All nine were in the pile and all nine issues were dated August 11, 2015. And it wasn’t just one copy of each. We get two to three copies of every Kentucky newspaper because sometimes we need multiple tearsheets for ads. And all of the copies we’re to get of those papers were included.

And also surprising, the copies, although 58 months old, were in mint condition. It was if they had just rolled off the press. No yellowing of the newsprint, pages were not torn, papers were not wrinkled or pulled apart.

Had it been one paper we probably wouldn’t have thought much about it. But it was nine. All with multiple copies of that edition. And all from different parts of the state. Way western Kentucky down by the Mississippi, northwest Kentucky along the Ohio River, southeast Kentucky in the mountains and Central Kentucky. Danville’s only about 40 miles from Frankfort after all.

You just have to wonder where in the world they’ve all been for nearly five years. And how they got together to make it to the Frankfort Post Office apparently over the weekend. Together.