And I’m willing to wager Ed Henninger won’t be betting on the Preakness favorite; find out why

We’re driving to Bardstown Saturday and wife Teresa is doing her usual thing. Cell phone in hand, checking out Facebook and see who’s gossiping about what. She chuckles, chuckles 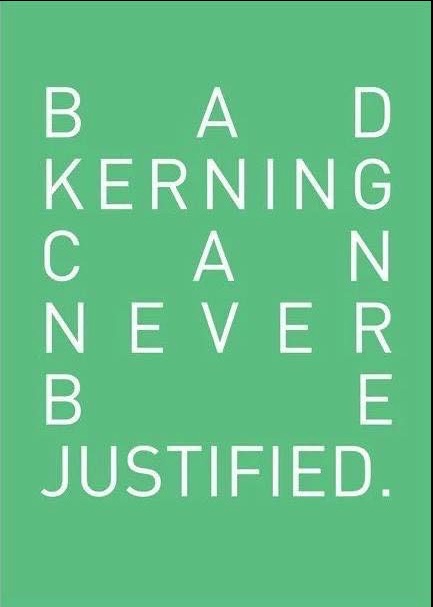 again and then tells me she found something for this week’s On Second Thought. She shows me the media addition in the green block and tells me, “Now that’s funny!”

I finally admitted it. “What are you talking about? What’s ‘kerning?'” That turned her gleeful. You mean I finally know something about the printing business that you don’t?

Yeah, I admitted it. I don’t believe there’s any such word as kerning. I’ve been in this industry 53 years and have never heard the word. That means there is no such word.

She started explaining kerning to me and said I should talk to Ed Henninger. He would know what it means, he would find this funny and he’d verify there is such a word.

I admit defeat. There is such a word, it’s in the dictionary and I had her send me the graphic to the right so I could share it this week. Perhaps you find it funny as she did.

Or maybe, just maybe, there’s one On Second Thought reader this week who had never heard the word kerning until just now. Tell me that’s so. Please!

Actually, Ed Henninger probably invented the word. He’s so against “justified” he came up with kerning just to prevent newspapers from running justified columns.

Ed – There was a horse race in Kentucky two weeks ago. We call it the Kentucky Derby. It’s the first leg of the Triple Crown. The second leg is Saturday. That’s called the Preakness. The winner of the Kentucky Derby is named Justify.

The odds-on favorite to win the Preakness is that same Thoroughbred, Justify.

But I’m willing to bet that you are so anti-justify (in newspapers) that you’ll place bets on every other horse in the race.