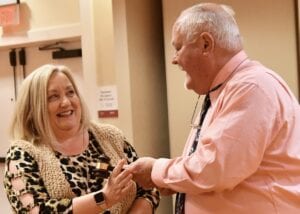 2021 President Sharon Burton receives the presidential gavel from David T. Thompson during a January 22 Board meeting. Photo by Regina Catlett.

Sharon Burton, publisher of the Adair County Community Voice and Farmer’s Pride in Columbia, took over as 2021 President of the Kentucky Press Association Friday. The exchange of the gavel took place on the same day and same place she would have received it from 2020 President Jeff Jobe had the 2021 Convention taken place.

It came during a “hybrid” meeting of the KPA Board of Directors at the Marriott East in Louisville, where the convention had been scheduled. Part of the board met in-person while others participated via Zoom. It was the first in-person meeting of the Board since the KPA Winter Convention on January 23, 2020.

During her comments on serving as President and setting the tone for 2021, Sharon emphasized improved communication both internal and external by KPA and its member newspapers. “We’re in the communication business,” she said, “but we (newspapers) don’t do the best job of communicating within the organization.” She’s asking KPA to develop a marketing/PR effort that will emphasize who and what KPA (and its sister organization, Kentucky Press Service) is and does for newspapers. “They’re there working for us and with us, not against us, not competitors.”

President Sharon noted that during the COVID year, when so many businesses are suffering, “KPS advertising sales efforts resulted in paying newspapers more than $2.5 million for advertising it had placed with Kentucky newspapers.”

In his outgoing remarks, 2020 KPA President Jeff Jobe noted he’s been serving on the KPA Board since 2003, and serving as President was the highlight of his time with the organization. He said he appreciated the other members of the Executive Committee that include 2019 President Jay Nolan, for working with him through numerous changes that included a staff reorganization in April. “That was not done because of COVID. That was done because the changes needed to be made to get the organization headed in the right direction.”

See the entire list of Officers and Directors of KPA for 2021 elsewhere in this week’s On Second Thought.