Jackson editor loses everything in fire; he just wanted his KPA contest certificates

“The people of the mountains have been incredibly generous as my family and I now own more clothes than pre-fire.”

“I was awfully close to the situation to draw the assignment but I write all the articles so it fell to me. You know small-town weeklies.” 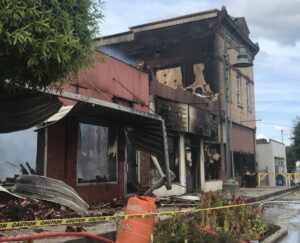 Those aren’t quotes taken from a story, written by Jackson-Breathitt County Times Voice editor Fletcher Long. Those are quotes from Fletcher himself.

On September 17, the building where Fletcher and his family lived was burned to the ground. The occupants lost everything they owned including Fletcher’s three beloved pet cats.

Fletcher wrote the story on the fire since he was “close to the situation” and seemingly apologized for having to do that. But then added, “You know small-town weeklies.”

Fletcher emailed me Wednesday morning with news of the fire. I know he wasn’t looking for sympathy or even for someone to reach out to others to help those misplaced by the fire. He just wanted to let me know that two of his cherished possessions — certificates from the 2020 KPA News Contest — were lost as well.

In the 2020 KPA News Contest, the awards announced this past January, Fletcher had two winning entries. He had gotten frames for his certificates and was proudly displaying them on a wall. He was so proud to have won the awards. He could have asked for help with clothes or furniture or household items but he only wanted to replace his certificates.

He asked if I would mind replacing those two certificates if I could and he’d be glad to pay for them. KPA was having nothing of that, Fletcher paying for them. The certificates were replaced without cost, as we always provide, and we put them in plaque holders and sent them off. The two plaques with his certificates appropriately placed were mailed Wednesday afternoon. Maybe by the time you read this, Fletcher will be cherishing those replacement certificates as much as he did the originals.

Well he is. This morning, Fletcher sent another email. Here, I’ll let him tell you:

“I am blown away by the kindness and generosity of the KPA in reissuing to me the two awards I received a year ago. I had lost the originals in my recent fire and thought this was a burden I was just going to have to carry. You not only sent me the certificates but you had them beautifully plaqued for me.

“I really can’t adequately express how much this has meant to me.”