Jamie Sizemore stepping down as The Standard’s publisher

Jamie Sizemore has announced she will step down as publisher of The Kentucky Standard at the end of this month. 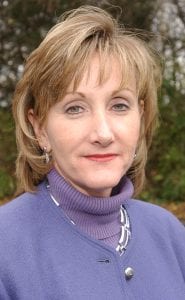 She will close nearly 10 years with The Standard at the end of June, as she takes a leave from the industry to attend to family matters, but said she plans to stay active in the community.

“This is a very difficult decision that I have wrestled with for five months,” Sizemore said. “Right now, I’m taking some time off to help care for my mother. I hope one day to be working back in this great community alongside the many dedicated leaders and passionate volunteers.”

Sizemore’s last day will be June 29.

She was named publisher of The Standard in August 2008, and has worked in newspapers for 32 years. Her entire career has been with Landmark Newspapers.

Jamie served as President of the Kentucky Press Association in 2011 and is responsible for KPA establishing a Public Notice website that contains nearly every public notice ad published in KPA newspapers. She has also been instrumental in working with legislators representing Nelson County on any legislative issue affecting Kentucky newspapers, especially public notices.

She graduated from Western Kentucky University and landed her first job as an advertising representative at the Galax Gazette in Virginia in 1986. She was soon promoted to general manager of The Community Times in suburban Baltimore, Md., and in 1988 she was named advertising manager for Roane Newspapers in Kingston, Tenn.

She moved back to her native Kentucky in 1992 when her path carried her to The News-Enterprise in Elizabethtown, where she served in various senior leadership roles including advertising manager, new ventures manager, Big Screen Television cable advertising manager and circulation director of the daily newspaper.

She was there until August 2008, when she was promoted to publisher of The Standard and PLG-TV. Two years later, she also assumed responsibility for regional management of The Lebanon Enterprise and The Springfield Sun.

Sizemore has been active in the Bardstown and Nelson County community over the past decade, serving in leadership roles on volunteer and civic organizations such as United Way and Bardstown Rotary. In 2006, Sizemore was recognized as the Newspaper Association of America’s Sales Executive of the Year for circulation category 150,000 and below. Sizemore actively served as a board member and past president of the Kentucky Press Association and was awarded the Boy Scouts of America’s Distinguished Citizen Award for Nelson County in 2017.

Under her leadership, The Standard gained statewide acclaim in the journalism industry, earning the title of best multi-frequency newspaper in news for six straight years and in advertising every year of her tenure in the annual Kentucky Press Association contest.

Chris Ordway, publisher of The News-Enterprise, who also oversees Landmark newspapers in the region, said Sizemore’s “skill, experience and leadership” have been “invaluable” to the newspapers where she has worked.

“It has been my privilege to work alongside Jamie for many years,” Ordway said. “To say that I’ve learned much from her during these years would be an understatement. Simply put, Jamie is one of the best in our company and industry.”

Sizemore said her time at The Standard in Bardstown and Nelson County was a special time in her career, and she would miss working on a daily basis with the staff.

“I love the people I work with and this community,” she said. “I’m very proud of the local quality journalism that The Kentucky Standard and PLG-TV continue to provide to this community. It’s been a privilege and an honor to work with such talented individuals at our operation.