Jeff Jobe, owner of Jobe Publishing and a member of the KPA Board of Directors, got the word Tuesday that he was invited to participate in a Daily Briefing from the White House and would be allowed to ask a question of press secretary Sean Spicer. That particular daily press conference from the White House took place early Wednesday afternoon.

Jobe had to have the capability of accessing the press conference via Skype, a requirement that he quickly made sure he’d be able to meet.

Jobe was one of four media types from outside of D.C. who participated in the first effort to reach outside “The Beltway” and be able to watch the briefing and ask at least one question of Spicer.

“They want to hear from media types out here in the hinderlands,” Jeff told me soon after he found out he was invited to participate, “to see what the issues are far away from Washington. Man, this is an historic moment for me.”

Later Tuesday, money.CNN.com had a story about Jeff under the headline:

A day later, FoxNews.com had this story with the headline: 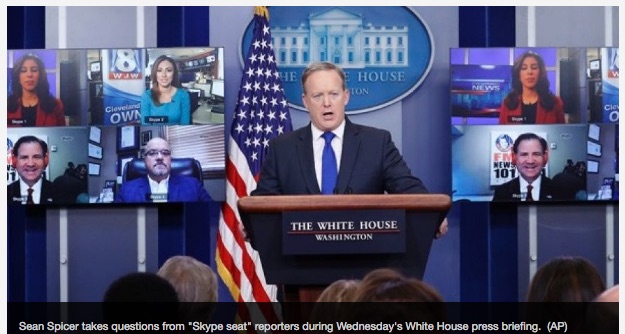 Jeff Jobe, in blue coat, is pictured in the lower right photo of the four media members who were invited to be part of the inaugural Daily Briefing via Skype.

The first question asked by a reporter with a “Skype seat” at Wednesday’s White House press briefing may not go down as legendary: “Can you hear me okay?”

But after Press Secretary Sean Spicer assured her he could, WPRI’s Kimberly Kalunian followed up with a question about sanctuary cities – and the briefing quickly flipped from novelty back to business as usual.

Kalunian, Natalie Herbick from FOX8 in Cleveland, radio host Lars Larson and Jeff Jobe of Kentucky’s Jobe Publishing were chosen as the “inaugural panelists” to try out the cyber seats. The White House hasn’t released a detailed description of how the panelists are chosen, except that anyone applying must live at least 50 miles from Washington, D.C. Kalunian was given the first question at Wednesday’s briefing, following Spicer’s practice of calling on non-traditional outlets at the top of the daily session.

While the questions were substantive – Herbick asked about economic recovery in Cleveland, Larson asked about land management and Jobe raised the topic of coal – the interactions were far more collegial than some of the tense exchanges seen between Spicer and members of the press corps in the early days of the Trump administration.

Herbick at one point thanked “Secretary Spicer” for the “rare opportunity.” In the briefing room, several of the reporters chuckled at the title typically reserved for Cabinet secretaries, not the press secretary.

“You’re coming back!” Spicer said, as the reporter continued with her question.

Larson addressed Spicer as “Commander Spicer,” a nod to Spicer’s rank in the Navy Reserve.

The panelists were shown on a pair of televisions located behind and on either side of Spicer and were only on screen while asking a question. Otherwise the TV screen showed a White House logo.

Spicer typically turned slightly towards the television screen on his right while the question was being asked but otherwise stared out at the briefing room when answering a question, creating a slightly awkward visual.

The freshness of the technology was also on display in the relaxed reactions of reporters. Early on during the briefing, Spicer called on a reporter who wasn’t in the room.

Someone shot back: “David’s not here – maybe he’s on Skype!”