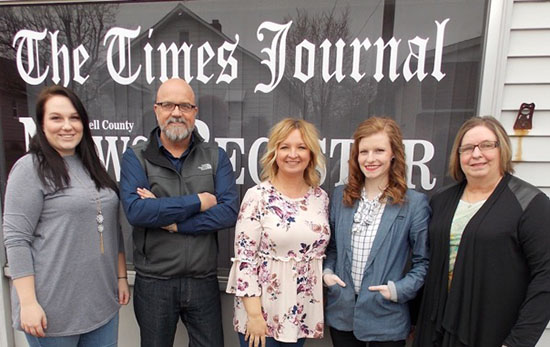 A mainstay of the local community, the Russell Springs Times Journal, officially transferred from Patsy Judd to Jobe Publishing, Inc. on April 1, 2018.  Jobe Publishing is based in Glasgow and includes six other weekly community newspapers.

Jobe Publishing owner Jeff Jobe began his newspaper career after attending the University of Kentucky. He first worked for the Courier Journal and Louisville Times Company, then a family-owned business covering the Commonwealth of Kentucky.

Finding his experience with a family-owned newspaper company satisfying, he continued on after the Bingham family newspaper was sold to Gannett Company.  Much of Jobe’s experience comes from years inside Gannett and other large daily newspapers owned by Thomson Newspapers and the Journal Register Company. Those experiences proved to be good training ground for Jobe to establish his own company with the purchase of his first community newspaper in 1998.  Since then, the Jobe family has grown along with the family business. 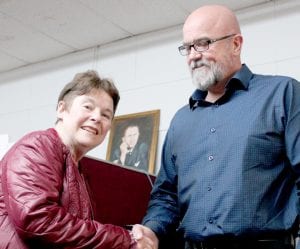 Patsy Judd, left, congratulates Jeff Jobe on his purchase of the Times Journal from her. Photo by Denver Wilson.

Jobe Publishing, Inc. owns and publishes the Barren County Progress in Glasgow, the Butler Banner-Green River Republican in Morgantown, the Edmonson County News in Brownsville, the Edmonton Herald News serving Metcalfe County, the Hart County News Herald in Horse Cave, and the Monroe County Citizen in Tompkinsville.  Most of the company’s papers began in the mid-1800’s while others have been more modern creations. With the acquisition of each newspaper, Jobe Publishing strives to honor each newspaper’s unique heritage and build a relationship with the community each newspaper serves.

The purchase of the Times Journal, Inc. is unique in that it brings a strong team accustomed to operating completely on their own.  Jobe is excited about the possibility of his existing team working with the Times Journal group to compliment the operations for all the company’s newspapers.  “I am very impressed with the level of dedication this staff has and will do all I can to help them grow while reducing the overwhelming work load an isolated operation demands.”

“I believe Jobe Publishing and the Times Journal are a good fit together.  Our company provides more than newspapers as our services include our online media group, transportation, delivery and direct mail operation.  Jobe Publishing is also one of the largest family owned commercial printing and book bindery services in Kentucky,” Jobe said.

“Of course, with change and growth there will be a learning curve and we hope our readers and advertisers will keep in mind everything we do is with a goal to better serve them,” Jobe added.

The Times Journal was established on October 13, 1949 by Andrew and Terry Norfleet. It has been the paper of record since that time but has survived and grown through some of the most turbulent times for newspapers.

“The Times Journal is always open to your news ideas and we will do our best to make your hometown newspaper one in which you can be proud.  Our office is located at 120 Wilson St. in Russell Springs, directly behind the Star Theater and we can be reached at 270-866-3191,” Jobe said.

To learn more about Jobe Publishing, Inc. visit www.jobeforkentucky.com or Jeff Jobe via email at jobe@jobeinc.com.