There’s no connection here but we had Melony Shemberger, a professor at Murray State, do a session at the convention on Facebook Live. And while Josh Givens didn’t get a chance to attend Melony’s presentation, after one use, he’s sold on the concept of using Facebook Live.

Last week, Josh went to a residential fire in Muhlenberg County and was one of the first on the scene. As he says, once he confirmed the family was ok he then started a Facebook Live report from the scene and says it’s something he’s going to use more and more.

Josh is editor of the Central City Leader News and recently joined the KPA Board of Directors as a State At-Large member for 2018.

“Just wanted to share what is a mind-blowing Facebook experience for the Leader-News. On Friday, there was a residential fire just south of Greenville in Muhlenberg County. I rushed to the scene, one fire unit was already there, but I could quickly tell the house was going to be a total loss.

“I made contact with the family and determined everyone was okay and then decided to go Facebook Live, which I have not done one time as editor of the newspaper. I can see now this is something we must always consider going forward.

“Our Facebook likes on our Leader-News page is just under 5,000, so these numbers have really blown us away.”

Below is a link to a 94-second Facebook Live report Josh did from the scene and then a Facebook post by Josh of some pictures and information about the fire. 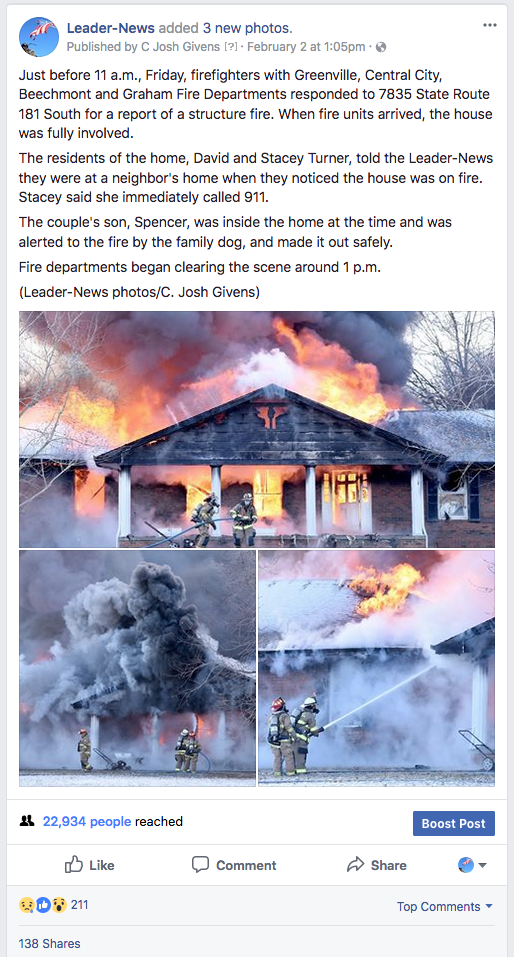