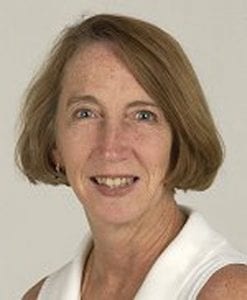 A journalist whose reporting on the deaths of children abused or murdered while under the supervision of a state agency is the 2017 recipient of the James Madison Award for Service to the First Amendment by a Kentucky.

Deborah Yetter, a reporter for the Louisville Courier-Journal, is the 12th recipient of the award given by the Scripps Howard First Amendment Center in the School of Journalism and Media at the University of Kentucky. The award will be presented at the center’s annual First Amendment Celebration, which begins at 6 p.m. Thursday, September 28, in the UK Athletics Auditorium on the first floor of the William T. Young Library.

She was nominated by two previous winners of the Madison Award.

“Debby has been the leading journalistic advocate for opening records of The Cabinet of Health and Family Services relating to severely abused children while under the supervision of the Cabinet,” wrote Jon Fleischaker, the second Madison winner and the state’s leading media lawyer.

“The litigation involving that effort lasted seven years, and Debby’s tenacious and superlative reporting on a regular basis was an important factor in generating public support for changing the way the Cabinet (of Health and Family Services) did business.  As you know, this successful litigation included an unprecedented award of damages and attorneys’ fees, and I can assure you that Debby’s contribution was essential.

David Hawpe, a former editor of the Courier-Journal, said Yetter is “a shining light in state government reporting. Her work has had a direct, powerful impact on the lives of Kentuckians – especially defenseless children who suffer at the hands of incompetent and irresponsible state bureaucrats.

“Those choosing this year’s Madison Award winner should, I believe, reward the courageous pursuit, the dogged reporting, the spotless reputation and the insightful commentary that have made Debby a gold standard for journalism directed at state government. Her work describes the arc from truly outstanding beat reporting on state health and welfare issues, which have been in the forefront of Kentucky news, to enterprise efforts that have helped produce important result.”

Yetter reported and wrote a story on a 20-month-old boy, under the supervision of the Cabinet for Health and Family Service, who died after ingesting drain cleaner. Attempts to review other records stemming from that story were denied by the cabinet and its lawyer. Eventually, the Courier-Journal and the Lexington Herald-Leader sued the state under the Kentucky Open Records Law. A Franklin Circuit Court judge and the Kentucky Court of Appeals panel ruled the records the newspapers sought, the records search that Yetter set off with her reporting, were indeed open to the public.

Deborah Yetter earned a bachelor’s degree in humanities from the University of Louisville and then earned a master’s degree in journalism from Northwestern University. She began her journalism career as a news editor in Cumberland, and at the Tri-City News in Harlan County. In 1984, she began working at the Louisville Times, the former afternoon affiliate of the Courier-Journal.

She joined the Courier a few years later when the Times ceased publication and the two staffs merged. During her time at the Courier, she has worked as a reporter, editor and editorial writer. She currently is a reporter covering state government, human services and health policy.

Yetter is a native of Louisville. She and her husband, Richard Yetter, have three adult children.

The Courier won a Pulitzer Prize for its reporting on the Carrollton bus crash in May 1985. A drunken driver crossed onto the wrong side of I-71 in Carroll County, resulting in the deaths of three adults and 24 members of a church youth group returning from a day at Kings Island. Former editor Hawpe said Yetter’s reporting on the crash was “critically important, focusing on school bus safety problems that finally were addressed. But look at the list of her recognitions. Notice that it is long and consistent. She has done award-winning work on a regular basis.

“What I love most about Debby as a journalist is that she has kept the vulnerable and the needy, especially including children, as the long-term focus of her work. Kentucky kids are safer, more secure today as a result of the journalism that she led. Her ultimate honor is not the respect and admiration with which she is regarded by other Kentucky journalists, but the thanks she has received for those she has helped.”

The Madison Award presentation will precede the State of the First Amendment Address, given by Judy Clabes, UK alumna, former CEO and president of the Scripps Howard Foundation, former editor of The Kentucky Post and the publisher of KyForward.com and NKyTribune.com.

Eight alumni of the school will be awarded distinguished alumni status and the winners of the university’s Constitution Day essay contest will be announced.