By Deborah Yetter, The Courier-Journal 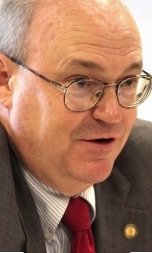 As a result, the state must disclose the records of the allegations as well as pay legal costs for the Courier Journal, which sought the records after Adria Johnson, the former commissioner of the Department for Community Based Services, abruptly resigned last year, Shepherd said.

Shepherd, who reviewed the disputed records in private, overruled the state’s decision to release only heavily redacted documents that blacked out details including the identity of the male supervisor Johnson accused of harassment, job titles, descriptions of events and places, and the names of all other state employees or officials mentioned in the records including Bevin.

The judge rejected the state’s argument that it was entitled to withhold such information because the state’s internal investigation had not substantiated Johnson’s allegations.

“Through disclosure of complaints and investigation materials, the public can discern whether a publicly funded state agency effectively investigates and addresses the misconduct of its employees,” Shepherd said. “This sheds light on the behavior of government employees, as well as the efficiency and productivity of our state workplaces. Perhaps more importantly, it ensures that such investigations are handled competently and without favoritism.”

Moreover, Shepherd found that the redactions served to conceal Johnson’s chief concern related to her discrimination complaint — that Bevin officials had shut her out of key decisions about adoption and foster care, one of her primary duties as commissioner.

Johnson, a black female, alleged that “her ideas had been ignored in favor of input from outside (male) advisers who appear to have had no background, training, education or experience in the field of foster care or adoption,” Shepherd’s opinion said. She alleged her duties were assigned to white males with less experience.

The Cabinet for Health and Family Services, where Johnson worked, will appeal Shepherd’s ruling.

“As noted by Judge Shepherd, ‘the Cabinet’s investigation appears impartial and thorough,'” reads a statement issued by the cabinet.

“To that end, the Cabinet will appeal this ruling to ensure that it can continue to conduct impartial, thorough and effective investigations into alleged misconduct by protecting the privacy of those public servants who participate in these investigations as well as those against whom allegations of misconduct cannot be substantiated.”

Johnson made the allegations of sexual harassment and discrimination when she resigned in June 2018.

The harassment claim involved Johnson’s allegations of a series of inappropriate comments by a male colleague including his interest in a sexual relationship with her. The colleague, a supervisor, denied the claims, and the internal investigation did not substantiate wrongdoing.

But Shepherd’s order notes that while the investigation appears to have been done in a “professional manner,” Johnson declined to participate so “it cannot be said that the internal investigation exonerates the the supervisor.”

And his order said that the matter warrants public scrutiny.

“In this case, because both employees were high-level appointees of the governor whose actions and responsibilities were very much in the public eye, the public’s right to know is especially heightened,” he said.

As for Johnson’s complaint about discrimination, Shepherd’s opinion said the cabinet blacked out information that hides key details about her allegations.

Without naming the individual, Shepherd’s opinion appears to reference an outside adoption “czar” Bevin hired in 2017 on a $240,000-a-year, no-bid consulting contract

“The redacted information shields from public view Commissioner Johnson’s concerns that the man (appointed) by the governor to be his chief foster care and adoption adviser — at an exorbitant salary — was not qualified for the job,” Shepherd’s opinion said.

The “czar,” Baptist pastor Dan Dumas, quit seven months into the job. The adviser left “without creating any discernible work product” only to be replaced by another male gubernatorial adviser, Shepherd’s opinion said

Shepherd’s ruling comes a week after ruling in a nearly identical case that the Bevin administration must pay $17,000 in legal costs of the Kentucky Center for Investigative Reporting for withholding records of alleged sexual harassment at the state Labor Cabinet.  As it did in the Courier Journal case, the state argued it did not have to release details including the name of the accused party because an internal investigation had cleared the employee.

Shepherd, in the Courier Journal opinion, said that’s not sufficient reason to withhold such information.

“The public has a right to know if the internal investigation was thorough, unbiased, and competent or whether it was a ‘cover-up’ of misconduct based on personal or political favoritism,” his opinion said.

Shepherd’s ruling dismisses a lawsuit filed by the Bevin administration against the Courier Journal, seeking to block access to the unredacted records. And it upheld a finding last year by Attorney General Andy Beshear that the public is entitled to the records.

Shepherd noted that the cabinet refused Beshear’s request to review the redacted records “in camera,” or in private, so the  attorney general could consider them in deciding whether the Courier Journal was entitled to them. As a result, the attorney general found that the cabinet had failed to prove it had a right to withhold the documents and ruled in favor of releasing the material.

While the law doesn’t require the state to provide such records to the attorney general, it could have led to a speedier decision and saved legal costs, Shepherd said.

“As a result, the Courier Journal has incurred significant legal defense costs and expenses,” his opinion said.

Shepherd’s order gives the Courier Journal seven days to submit its legal costs to him for review.