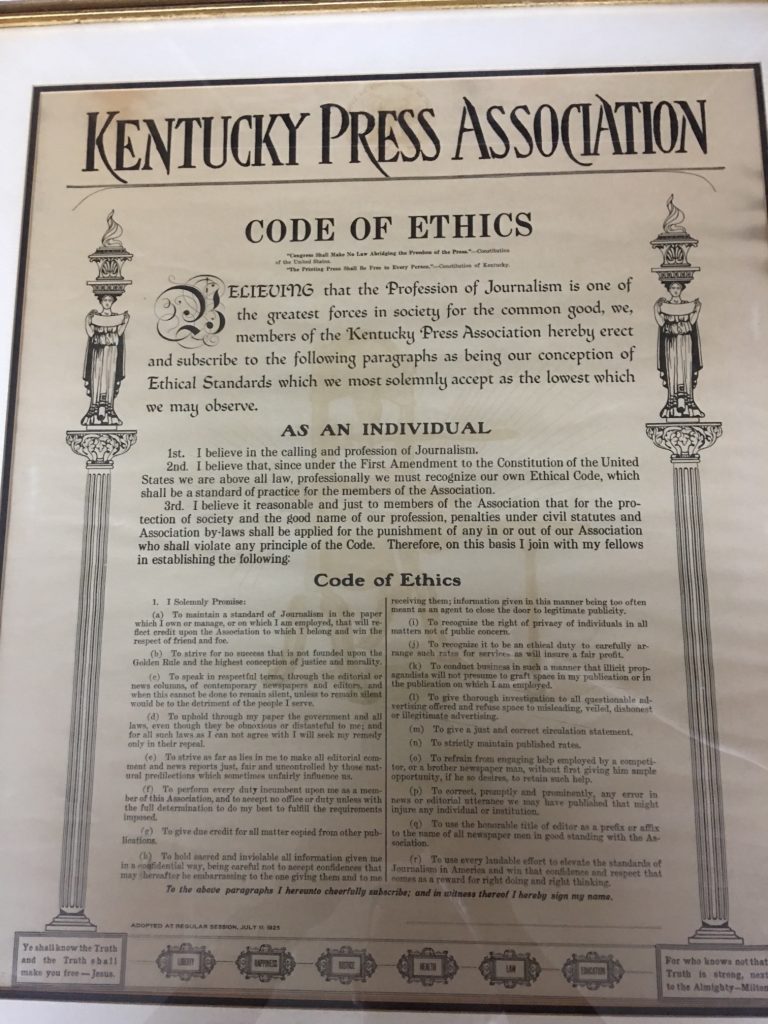 In prepping for the Sesquicentennial celebration of the Kentucky Press Association in 2019, we’re all looking for any historical documents we can share with members and the public. John Nelson, who is authoring a book about those 150 years found a copy of the Code of Ethics adopted by KPA in July, 1925.

The document is above; what it states is below. There have been legislators in recent years that wanted to legislate a Code of Ethics on KPA members. Guess now we can show them they don’t need to worry about that because there’s been once for the last 92 years, whether or not it’s still in place.

Believing that the Profession of Journalism is one of the greatest forces in society for the common good, we, members of the Kentucky Press Association hereby erect and subscribe to the following paragraphs as being our conception of Ethical Standards which we most solemnly accept as the lowest which we may observe.

1st.   I believe in the calling and profession of Journalism

2nd.  I believe that, since under the First Amendment to the United States we are above all law, professionally we must recognize our own Ethical Code, which shall be a standard of practice for the members of the Association.

3rd.   I believe it reasonable and just to members of the Association that for the protection of society and the good name of our profession, penalties under civil statutes and Association by-laws shall be applied for the punishment of any in or out of our Association who shall violate any principle of the Code. Therefore, on this basis I join with my fellows in establishing the following:

To the above paragraphs I hereunto cheerfully subscribe; and in witness thereof I hereby sign my name.