‘Just another day in the life out here in newspaper land’

The last year has had its share of U.S. Postal Service oddities. At least for Kentucky newspapers.

First, there was the story we had of nine Kentucky newspapers arriving at KPA 58 months — yep, 58 months — after the publication date. Not one paper, mind you, but nine different KPA members.

Then in August 2020, there was the day the postal bins that Kentucky newspapers arrive at the KPA office were specifically marked for ELECTION BALLOTS ONLY.

Now comes an entry from Allison Shepherd at the LaRue County Herald News:

Thought you’d get a laugh from this Postage Due item we paid today – only 2 years old!!!!   She wrote including an email to her from staff member Helen Hinton.

“Josh paid the postman while I was at lunch; when I opened the envelope, I couldn’t find this customer’s name or address in CircPro.  That’s when I pulled the label back to see Oct 23, 2019!”

Allison forwarded me Hazel’s email and added this: “Just another day in the life out here in newspaper land.” 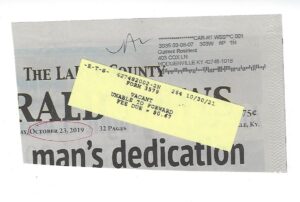 The post office added a yellow label that read:

You’d think since it took a little more than two years to get the undelivered paper back to the newspaper, the post office might be lenient and forgo the 67 cents. So the Herald News had to pay to get the paper into the mail stream as a Periodicals Class publication and then had to fork over 67 more cents to find out it was not delivered at all.

Allison said Monday morning they do plan on asking the local postmaster to give back the 67 cents “fee due” to let the newspaper know it was not a usable address. At least it was 25 months ago!!!

We’ve heard about mail slowing down but this might be going a little overboard.