Kappes publishes book of 125 of his newspaper columns

By Brad Stacy, The Morehead News 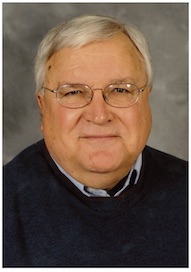 “The View From My Keyboard,” a collection of 125 of Keith’s personal columns from The Morehead News, Grayson Journal-Enquirer and Olive Hill Times, has been published by the Jesse Stuart Foundation, Inc.

“I’m especially proud of this book because it consists entirely of the favorite columns of so many of my faithful newspaper readers,” said Kappes, who also served as a member of the Kentucky Press Association Board of Directors.

Kappes said it took him nearly three years to put the book together, having to choose among more than 400 columns in his tenure as publisher and as a freelance contributer.

The project was originally going to be just about family, but after consideration he decided to break the book down into seven categories: his favorites, community, family, humor, faith, military, and miscellaneous.

“The secret to writing is writing about things you know,” he said. “I really enjoyed putting this together. It was very nostalgic.”

In his column writing years, Kappes recalled one piece in particular that stood out more than others.

One was pieces about being estranged from parents.

“I wrote one about being estranged from parents and the next day a man called and said that column changed his life,” Kappes recalled. “After not speaking to his father in 15 years he called him to attempt to repair their relationship. Not too much later he emailed me a photo of he and his father fishing.”

A native of Carter County, he was a reporter for The Associated Press in Ohio, Ironton (Ohio) Tribune, Ashland Independent and Huntington (W.Va.) Herald-Dispatch.

He has won national and statewide awards for excellence in personal commentary.

“The biggest professional highlight was coming back to the newspaper business,” Kappes said. “I welcomed the chance to write how I felt and it turned out that was the most fun for me.”

The 76-year-old said he’s proud of this project, as it represents how he feels about a variety of issues and how people influenced him throughout his life.

Stephanie Ockerman, editor of The Morehead News, described his writing style in this manner:

“Keith’s columns evoke unlimited emotions from our readers who anticipate his insights in to the human experience each week. An accomplished wordsmith, Keith has a strong sense of community and a unique talent for sharing life’s indelible moments.”

“Keith is a master storyteller,” said Wayne D. Andrews, President Emeritus, Morehead State University. “He’s a keen observer of the human condition. He relates and translates his observations in sharply pointed and humorous ways. Sometimes, he causes outrage. He almost always makes you laugh. And, occasionally, he makes you cry. This book will be greatly enjoyed by all!”

“Keith is among Kentucky’s great storytellers, taking his audiences on journeys right along with him in ways that make you laugh and cry. Readers will love this book because his skillful writing touches all the emotions in unique ways,” said Mark Maynard, managing editor of Kentucky Today and former editor of the Ashland Daily Independent. “It’s a must-read that you won’t put down.”

The book, priced at $20, is available locally at CoffeeTree Books, the Kentucky Folk Art Center, Morehead Visitor’s Center, and the MSU Bookstore.

Kappes contributed a chapter in 2017 to a book, “Appalachian Murders & Mysteries,” also published by the JSF, and has two other fiction projects underway. He is available for book signings and readings at meetings of community organizations.