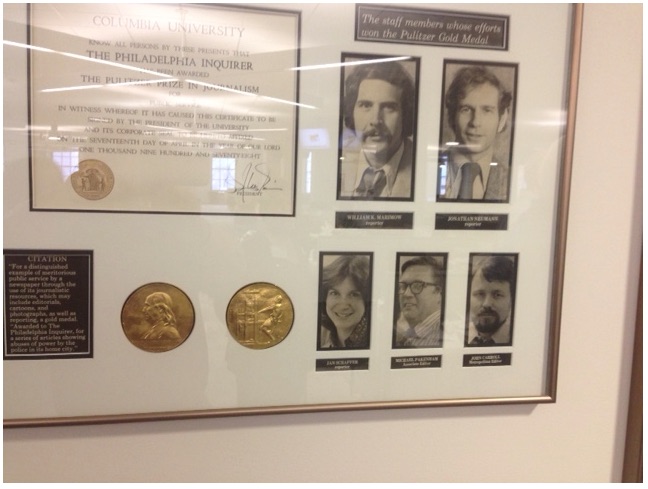 At the Newspaper Association Managers convention last week in Philly, The Philadelphia Inquirer/DailyNews/Philly.com invited us to a reception at its downtown building. We were given a tour of what had been the women’s department of a large retail store before The Inquirer and its two sister publications moved it.

Part of the tour included a walk through the newsroom and along side the Wall of Pulitzer Prizes the Inquirer had won over the years. Of course, I wanted to see if anyone I knew was on the Pulitzer Wall and it didn’t take long to find that connection.

There was John Carroll’s photo. John was long-time editor of the Lexington Herald-Leader.

The photo of John (his is the picture on the lower right side of the award shown above) is on the plaque that marks the Pulitzer Prize for public service that The Inquirer received in 1978. John was the primary editor for the series on criminal violence by Philadelphia police that Bill Marimow wrote with Jonathan Neumann. John was also a key editor  on the Pulitzer Prize The Inquirer received for its coverage of the near meltdown of the nuclear power plant at Three Mile Island near Harrisburg. John left The Inquirer in fall of 1979 for Lexington and then joined The Baltimore Sun as the editor in 1991.