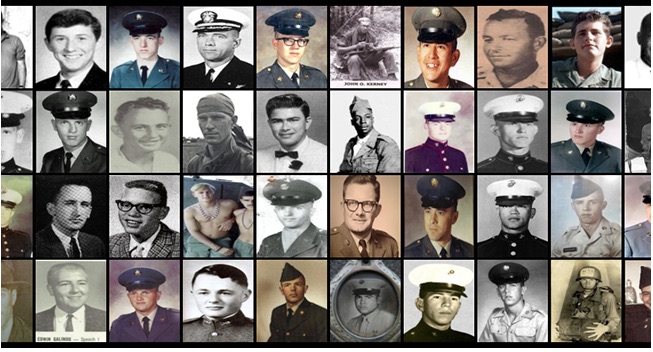 You can find out more about the Wall of Faces by visiting http://www.vvmf.org/

Four years ago, I promoted a national effort to locate photos of soldiers killed during the Vietnam conflict. The memorial, Wall of Faces, is an attempt to have a picture of all 45,000 Americans killed during that period.

For Kentucky, there were 458 soldiers killed in Vietnam whose photos were missing. Around Memorial Day 2014, the plea went out to all Kentucky newspapers to list the names of local or regional soldiers whose pictures were missing. The first effort resulted in about 40 pictures being furnished by families or by newspapers. By Thanksgiving 2014, the number for Kentucky was down to 416.

Andrew Johnson, who was installed last week as president of the National Newspaper Association, was the force behind finding all missing photos and pushed for each state to help find those pictures. It was a tribute to his son who was killed a few years ago in Afghanistan.

Johnson spoke to a group of state press association executives last week during the NNA Convention in Norfolk and updated us on the project. From 45,000, the number is down to about 1,900 photos still missing. And all but 16 states have every single soldier killed with their picture on the Wall of Faces.

Last I heard, there were still a couple dozen missing photographs for Kentucky soldiers and I told Andrew KPA would make a special effort to have Kentucky newspapers help find those still missing.

Over the weekend, came great news. “Kentucky is one of the states with every single soldier’s picture represented on the Wall,” Andrew wrote back in an email.

So here we are, upon the beginning of National Newspaper Week and the theme, “Journalism Matters.”

How appropriate to let you know Kentucky has 100 percent representation on the Wall of Faces of every soldier killed in Vietnam. From the 458 photos missing in 2014, because of you, there are none without their photo shown on the Wall.

Congratulations to you for helping find the photos or locating families of those soldiers and making them aware of the project.

I hope to have more on this in the near future, including making available to you a photo of every Kentucky soldier represented on the wall, and encouraging a special section around Memorial Day in 2019. It will be a tribute to those soldiers who fought to defend our nation.