“In today’s digital age, it can often be challenging for consumers to determine what information is truly reliable. But whether it goes by the name of ‘propaganda,’ ‘hype’ or ‘spin,’ it is possible for news readers to identify ‘fake news’ and avoid it entirely,” Laura Harvey reports for The Messenger in Madisonville, Ky., in her story about a panel recently at Madisonville Community College, giving attendees tips on how to tell fact from fiction. 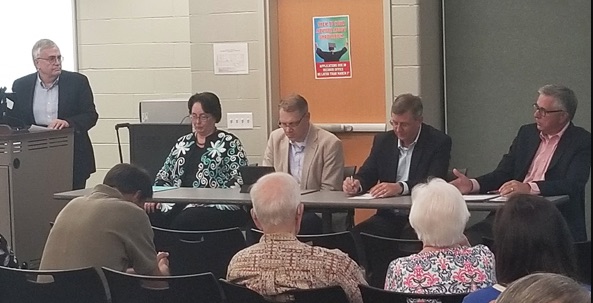 Panel moderator Al Cross, who is the director of the Institute for Rural Journalism and Community Issues at the University of Kentucky, publisher of The Rural Blog, said the concept of fake news was nothing new, and that America’s first newspaper was shut down in 1690 for printing falsehoods. But though society began to demand more truthful journalism in the 1700s, most American newspapers during the Revolutionary War were partisan and spurred a rise in sensationalist news. Public backlash helped create the idea of journalism schools, which, along with the Associated Press, helped codify standards of ethics for journalists, Cross explained.

But with the rise of the internet and social media, it has become easier for anyone to publish “news” and more difficult for readers to identify fake news. “Fake news reports have caused damage to reputations and diminished trust, Cross said. The effect on the 2016 election is still being studied. Local news media scores better on trust than national news media, according to national studies,” Doreen Dennis reports for SurfKY News in Madisonville, Ky. “BuzzFeed reported the top 20 fake stories received more engagement than 19 major media outlets in 2016, and the jury is still out on whether unverified news articles affected the election. Russia’s alleged involvement would be hard to prove at this point, he added.”Jennifer P. Brown, programming chair of the rural-journalism institute and former editor of the Kentucky New Era in Hopkinsville, said readers could check any of the following sources to help verify whether a news story is truthful:

Richard Nelson, the director of the socially conservative Commonwealth Policy Center, said the presence of click-bait stories in publications have driven people to seek other news sources, and advised journalists not to identify themselves as Republicans or Democrats to reduce even the appearance of bias, Harvey reports.

Messenger Editor Mike Alexieff said he wants readers to know that local newspapers don’t have a political agenda, and only aim to offer fair, accurate local news. Ron Sanders, owner of SurfKY News, said he believes some newspapers do have a political bias, and defended coal, long a major industry in the region, from reports that he said were biased, Dennis reports.