Kentucky startup weekly featured in Pub Aux: ‘It was the best time to start a newspaper’

When Community Newspaper Holdings announced in May it was shuttering the Greenup County News Times in northeast Kentucky and two of its other weeklies, News Times executive editor Cathie Shaffer did not give up. She got busy. 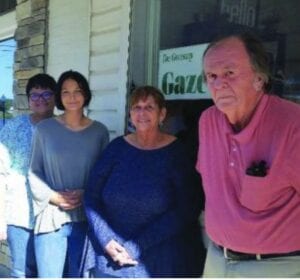 She recruited her daughter-in-law, Amy Shaffer, and her longtime colleague, News Times sportswriter Mason Branham, and together they started the Greenup Gazette.

(Cathie Shaffer was an elected member of the KPA Board of Directors at the time the Greenup County News Times was shutdown.)

Early on, Shaffer intended to apply for a Small Business Administration start-up loan, and the trio crafted a 12-page business plan, Shaffer explained. But her federal government stimulus check arrived in time to provide some extra revenue, and Shaffer reckoned their community needed a newspaper more than she needed $1,200.

“We thought it would be better to start out on a cash basis rather than go into debt,” she said in a recent Zoom chat.

The group rented the building that once housed the News Times. Shaffer already had a space in the front office where she managed a shop that sells locally sourced handmade crafts.

“We had desks and chairs, cameras and printers,” she said. “I went to a local pawnshop and bought a computer.” She invested in new Adobe InDesign software and a subscription to the Metro Newspaper Service.

The first five issues of The Greenup Gazette were published online, and by July, the newspaper was in print. Today, circulation is around 400 and growing, distributed through the Postal Service, convenience stores and the newspaper office.

Greenup is a tiny town of around 1,200 located in the northeast corner of Kentucky, nestled on the southern bank of the Ohio River. Ashland is the closest large town and is home of the Daily Independent, a CNHI paper, which absorbed the three weekly newspapers that closed.

Shaffer gets the Gazette printed at the Ironton Tribune, across the river in Ohio. Her son works at the Tribune and makes sure the Gazette’s pages are error-free before they go to press. The Gazette hits the streets on Thursdays and averages 12 full-color pages each week.

This arrangement is perfect for Shaffer, and she could not be more pleased at the way things have fallen into place.

The fact that no one working at the Greenup Gazette earns a salary is of little concern for Shaffer. She and Branham are the only two “employees,” and both have savings and other revenue sources to cover their living expenses.

Even Shaffer’s 6-year-old great-granddaughter gets into the action and helps with simple tasks, including serving as a traveling companion on trips to the Post Office to mail out the newspaper.

Shaffer herself is a whirl of activity. In addition to publishing the Gazette and managing the craft shop, she is a part–time pastor and runs a small publishing house. She also makes crafts to sell in her shop and writes books.
In her friendly, chatty manner, she makes it all sound simple.

“I don’t do housework,” she said, laughing. And then she grew serious.

“My husband passed away a few years ago, and the kids and grandkids are all grown and out of the house. I don’t want to sit home and watch TV at night,” she said.

Over the years when her husband and kids were around, she developed a habit of writing from 10 p.m. until midnight. When she realized she had the early evenings available too, she found productive ways to fill that time. She estimates she works about 50 hours a week, clocking in less time than when she worked in corporate journalism.

“Working for myself is easier than working for a corporate newspaper,” she said. “I don’t have the extra paperwork or reports to write, and there’s much less pressure. I go to work happy.”

Together, Shaffer and Branham report the news of their town with the efficiency of a well-oiled machine, covering news and taking photos while they are on the way to meetings, interviews and events.

“Mason volunteers for Meals-on-Wheels, and while he’s out driving, he stops at the animal shelter to get photos for our adoptable pets feature or photos of newsworthy events,” she said. “And if I go somewhere and take a photo, I call on local businesses and advertisers while I’m out.”

Shaffer remembers the day the first issue of The Greenup Gazette rolled off the press and arrived at the newspaper office. Residents were waiting outside before the office opened because they wanted to be the first to buy a copy and subscribe. Single issues are 75 cents. Subscriptions are $37 a year.

She recalls a visit last summer from a local woman who had not left her house since the COVID-19 quarantines that started in March.

“She came down to the Gazette to buy a newspaper,” Shaffer said. “It was the first time she had been outside in months, and that shows how much she values us.”

Advertisers were eager to start doing business with Shaffer, too. And in The Greenup Gazette, ad space is priced to sell.

Even though COVID-19 forced the cancellation of the local agricultural fair, the 4-H livestock sale carried on, and the newspaper published four pages of photos and stories.

“I called up our local farm supply and asked him if he wanted to sponsor the livestock sale coverage for $50, and he signed right up,” she said. A local game store sponsors the puzzle page for $10 a week.

“Nobody says ‘no,’” she said and reported that after just a few short months, the paper is operating in the black. She believes paydays will be in their future after the newspaper begins qualifying to publish public notice advertising. Meanwhile, she’s happy to put the paper out week after week as a public service.

“We didn’t start the newspaper to get rich,” she said. “We did it for our community.”

Teri Saylor can be contacted at terisaylor@hotmail.com.