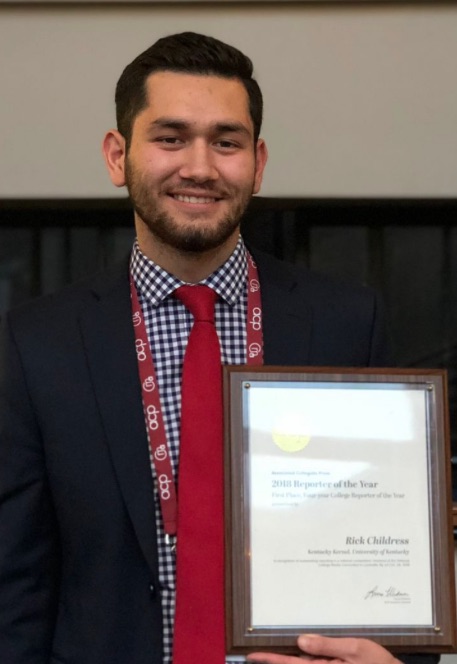 Kentucky Kernel news editor Rick Childress won first place in the Reporter of the Year category, awarded by the Associated Collegiate Press at the National College Media Convention in Louisville on Saturday.

Childress was named a finalist for the award nearly a month ago. Of the 10 finalists, five were recognized as honorable mentions and the top five were specifically recognized.

“It’s fun to get recognized, but you got to get back to work,” Childress said.

He’s excited to keep working at the Kernel and continue to “serve the campus community.” He joined the Kernel as a freshman news reporter and was named news editor in November 2017 as a sophomore. His fourth story to be published at the paper was an investigation into fake ID use among college students and was one of his three stories submitted to ACP.

The award application requires three stories written in a year-long time frame. Childress’s other two stories were a profile on a student who reported a threatening incident in her class and felt she was punished for it and a feature on the Kentucky hockey team.

“I am so incredibly proud of Rick,” said Bailey Vandiver, Kernel editor-in-chief. “I just keep emphasizing to everyone that this is a national award. Rick was just named the best collegiate reporter in the entire nation. How amazing is that?”

ACP “annually recognizes the best work of collegiate student journalists,” according to the convention’s program.

“I think this goes to show what we’ve already know, that Rick is one of the best collegiate journalists in the country,” said Ryan Craig, Kernel adviser. “He has a unique mixture of both talent and drive, and that comes through in his reporting.”

Kernel art director Arden Barnes was a finalist in the General News Photo category. At the convention, she was recognized as an honorable mention in that category. Barnes was unable to attend the convention, however, as she was participating in the Mountain Workshop, a prestigious photojournalism program for college students.

Barnes’ top-10 photo was of the total solar eclipse that occurred last fall.

“It’s astonishing,” Barnes said. “When I took that photo I certainly didn’t think it would be award-winning.”

Barnes said it’s sometimes difficult to see “the good in your own work.”

“Being a part of the Kernel and having a staff that boosts each other up in every circumstance is something I’m extremely thankful for and extremely blessed to have,” Barnes said.

Barnes has worked as a photographer for the Kernel since her sophomore year. Last year, she served as photo editor.

“The Kernel is so incredibly lucky to have Arden as a photographer and as art director,” Vandiver said. “Her photo of the eclipse is only one of many amazing photos of hers that the Kernel has been lucky enough to publish.”