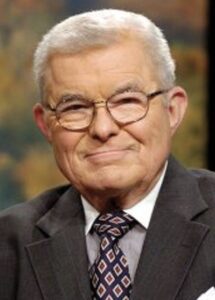 On must-see-TV Friday nights, Al Smith brought KET’s public affairs programming to households across the commonwealth as the host of Comment on Kentucky.   For 33 years—the longest tenure of any host on public television—Al held court to inform, amuse, challenge and speak the truth about Kentucky’s public life.

On November 10, KET will honor Al’s remarkable life and accomplishments with a special tribute event.  Hosted safely, a VIP gathering will serve as the studio audience for the taping of a moderated panel discussion including Al’s frequent guests.   Immediately following, guests can enjoy a special reception where they will have an opportunity to record video reflections and tributes.

KET is honored that Martha Helen Smith will be participating, along with Lowell Press, son of KET founder and Comment creator Len Press; Len’s 100th birthday would have also been on this date. The taped program Comment on Kentucky: Remembering Al Smith will air on Friday, November 12 at 8:30 p.m. Eastern/7:30 a.m. Central. And how fitting, this all takes place during the anniversary week of Comment’s 1974 debut.