KEVIN SLIMP SURVEY: The state of newspapers in 2020

Comparing the health and ownership of papers to previous years

It’s a fascinating time in the newspaper business, especially from a research perspective. 2020 marks my fifth straight year polling newspapers
in the U.S. and Canada about the overall health of the industry. I’ve just completed crunching the numbers from the most recent survey and will
share some of the information here.

It will take more than one column to cover everything we’ve learned, so let me share a couple of the most interesting trends that stand out from
the 2020 numbers. I’m going to stick with results from the U.S., since the number of participants from Canada were too few to be statistically
significant.

Overall 7.5 percent of U.S. papers report being “very healthy,” compared to 8.5 percent one year ago. In 2020, 30 percent report being
“relatively healthy,” compared to 36 percent one year ago. “Not bad” stayed about the same, with 46 percent of U.S. papers reporting their health
is “not bad” in 2020, compared to 44 percent who gave the same answer in 2019. In 2019, 10 percent of respondents noted their papers were in
poor health, with 14 percent answering that way this year. “Near death” stayed the same at 1 percent.

Add all those numbers together and we find that the industry seems to be a little less healthy in 2020, but not by much. Frankly, with the
COVID-19 pandemic at its height while many papers were completing their surveys, I was surprised the numbers weren’t more foreboding.
Each year, I’m fascinated by the numbers relating to newspaper ownership. It feels like I’m always hearing that the newspaper business is being
swallowed up by venture capital groups. And while there may be some truth to that among papers owned by national newspaper groups, that just
doesn’t seem to be the case among most newspapers.

How has ownership in newspapers changed over the past two years? Not much. Here’s the breakdown:

3%: Moved from one group to another group owner

The survey was very detailed, covering several aspects of the business of newspapers in 2020. A few other key findings:

• Staffs have gotten smaller since 2018, with 48 percent of U.S. papers reporting having cut the size of their news staff over the past two years,
with 34 percent indicating a cut in their sales staffs.
• I know it’s a chicken/egg type of thing, but still it’s interesting that only 6 percent of newspapers who haven’t made staff cuts indicate being in poor
health, compared to 14 percent of newspapers overall who answered that way.
• Of papers who have not cut staff, 51 percent report being in as good as, or better, health than two years ago. Compared to papers who reduced
staff size (25 percent reported being in as good or better health than two years ago), these papers were significantly healthier.

There’s a definite correlation between staff retention and overall health.

From a personal perspective, there’s a definite “uptick” in the air in the newspaper business lately. I’m noticing a lot more newspapers, groups
and associations calling to arrange consulting and training. From where I sit, it seems like newspapers are ready to begin growing again.
I just passed my 800-word limit. In my next column, I’ll cover more results from the 2020 newspaper industry survey.

Kevin Slimp can be reached at kevin@kevinslimp.com. 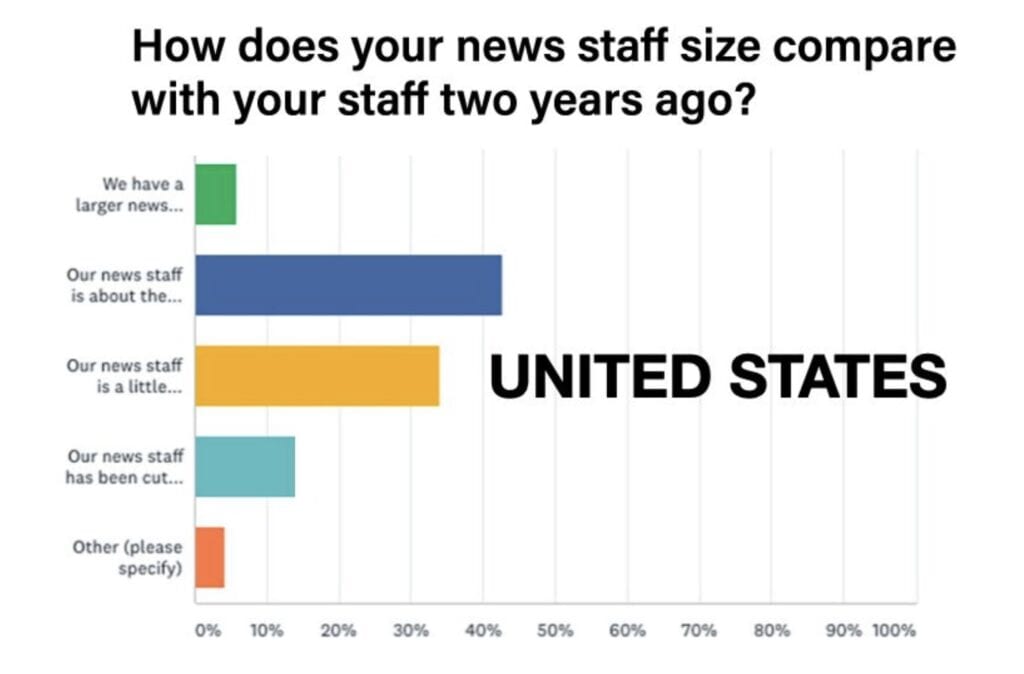