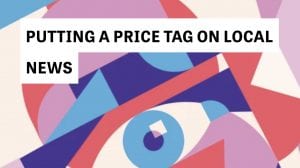 A crisis faces local newsrooms across the nation. News publishers have, for over a decade, competed with search engines and digital platforms, not only for their readers’ attention, but also for advertising revenue. At the same time, we have seen decades of growing distrust and partisan antipathy toward institutions of all kinds, including journalism. Local newspapers are especially vulnerable to these trends. As a result, there have been waves of consolidation, often resulting in fewer newsroom jobs. Particularly controversial have been acquisitions of newspapers by private equity investors, often followed by debate about how the newsroom is managed by its new ownership.

The financial strain resulting from changes to the business of making news — especially for the local newspaper industry — has left many communities with little or no local reporting. There is growing evidence of the harm caused by these growing “news deserts”: Fewer residents vote in elections, fewer people run for office, which means fewer choices for voters, and residents are less likely to say they are well-informed about the issues and candidates in local elections. Yet research has shown — and this study confirms — that the vast majority of Americans are unaware that many local news organizations are in financial peril.

Encouragingly, many Americans consider local news organizations to be an important community asset and a source of community pride. But, despite generally positive assessments of local news, our findings suggest that the financial base that supports these organizations is limited. This gap suggests a market failure — many recognize the benefit of the product to the public but are unwilling to pay for it. This report offers some evidence that education — both about journalism’s benefit to society, as well as the existential threats that local news organizations face — could unlock public support, including financial support.

This report identifies challenges and opportunities for restoring financial health to local news organizations across the country. A circumscribed base of supporters willing to pay for or consider subsidies to local news organizations presents a challenge, but still nearly half of Americans (47%) say local newspapers are vital and should be preserved even if they can’t sustain themselves financially. As experts and policymakers devise and debate possible public policy approaches, one actionable policy recommendation to implement today is raising awareness about the financial health of the local news industry.