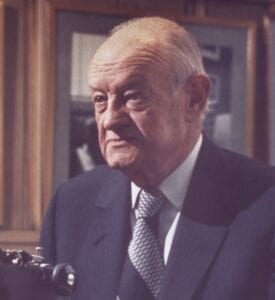 Will your blood, toil, tears and sweat in newspapering today be relevant 10 years from now?

I wondered about that as I finished reading “Knight: A Publisher in the Tumultuous Century.” It’s the biography of John S. Knight, the newspaperman who built an empire. Yes, the Knight Newspapers that became Knight-Ridder and then McClatchy, whose uncertain future is the news of today.

John Knight died in 1981. I found the 1988 biography by former Miami Herald columnist Charles Whited among a pallet of boxes in the basement of the Richmond Times-Dispatch, where I was publisher until Dec. 31. The boxes contained lots of books that had once lined the walls of a former publisher’s office. They had to go because the RTD sold its downtown building in Virginia’s capital city.

Funny how you stumble across wisdom. Even old-school lessons.

Knight’s life is a study in contrasts. No problem. That probably sums up most people in this crazy business. But one of the profound contrasts to today’s newspaper scene is how Knight was among the media CEOs known more for his column writing, than his achievement of quarterly earning goals. Knight’s journalism earned him a Pulitzer Prize.

He also knew British Prime Minister Winston Churchill who is responsible for the wartime phase in the first paragraph. The book “Knight” quotes his “The Editor’s Notebook” columns and speeches to advance a detailed chronology and to capture Knight’s newspaper philosophies.
Time for you to weigh in.

Judge these 10 quotes from the book on whether they’re still relevant today:

“True journalism — and I emphasize the word ‘true’ — is the lamplight of our modern society. Without it, the lamps are turned down and we revert back to the Dark Ages. The modern newspaper is the means by which the whole human race, if but allowed the opportunity, may acquire knowledge and gain wisdom. It is the beacon of light of this new experiment we call democracy.” (Sound familiar? This was Knight in 1945.)

“Your first duty is to the citizen who buys your newspaper in the belief that it has character and stability…There is no known substitute for integrity and character, no synthetic for guts.” (This advice appeared in The New York Times after Knight bought the Philadelphia Inquirer and the Daily News in 1970.)

“Unless the newspaper is profitable, how the hell do you have any liberty? Without profits you’re always at the mercy of the banks. You’ve either got to conduct a profitable newspaper or be subsidized, and no matter who does the subsidizing you’re never again free. I’m free. Nobody puts pressure on me.” (Answer in 1973 to an interviewer’s question: “It’s always the profit motive first?”)

“The truly distinguished newspapers in this country are those which have dared to face public wrath and displeasure. Criticism rises in portion to the amount of news read or heard that does not fit the public’s preconceived ideas. …We must report the world as it is and not as we would like it to be.” (Speech in 1971.)

“A successful newspaper is a reflection of its owner or editor. This is something more than dedication to printing unbiased news, giving voice to all points of view or the skillful assembling of interesting features and comics. The newspaper editor must be the conscience of the community….An editor should lead.” (1965 speech.)

Why are newspapers decreasing? “In a great many cities it’s pure economics. They don’t want to go out of business, nobody wants to sell to a competitor, and they don’t like to give up the operation of the paper. But with increasing costs, there just aren’t enough dollars for some of them to exist.” (The quote is from an interview in 1966.)

“It’s simple. When we buy a newspaper, we spend money to improve the editorial product. That brings us more readers who read the paper more thoroughly, producing better results for advertisers. More revenue from circulation and advertising produces better profit. And this we plow back into improving the editorial product still more.” (Interview in 1972.)

“The business or professional man cannot extend his imagination very far before it runs into the chain of command. He cannot hire and fire at will even if he is the big boss, because even the big boss becomes a creature of the company he creates. So the modern man is regimented, with mounds of paperwork, conferences, anxieties about personnel, government, labor unions and other often-mundane matters that give us premature heart attacks and galloping ulcers.” (On organizational pressures, from a 1957 commencement address.)

“I get disgusted with men who go to editorial conventions and orate about freedom of the press when they don’t use what freedom they’ve already got. They are generally frightened, timid rabbits when real questions of press freedom arise.” (interview 1944.)

“The threats to freedom of expression concern us all. To borrow a phrase, ideas can be dangerous but the suppression of ideas is fatal. Freedom is a dangerous way of life. But it is ours.” (1955 speech.)

What’s your verdict?
For me, it’s 2020 and I’m instinctively underlining Publisher Knight’s points in an old book. I’d say they’re all relevant.
Use the relevance as inspiration to write and talk about newspapers knowing 30 years from now someone reading those statements will nod in approval.
Better yet:
Win over a non-reader or non-advertiser of today.

Please allow one more Knight quote because it offers a chuckle:
“I hope ‘somewhat larger’ will not mean miniscule.”
The publisher was arguing in 1980 with the editor over the need for larger type in the newspaper.
Some arguments never change.
Tom Silvestri is executive director of the Newspaper Association Managers’ Relevance Project, which advocates for community newspapers. He retired Dec. 31 after 15 years as the president and publisher of the Richmond (VA) Times-Dispatch and 42 years in newspapering.